You’ve heard all the rumors, read all the newspapers, and now it’s time for you to finally see the mall. It’s Grand Opening Day! 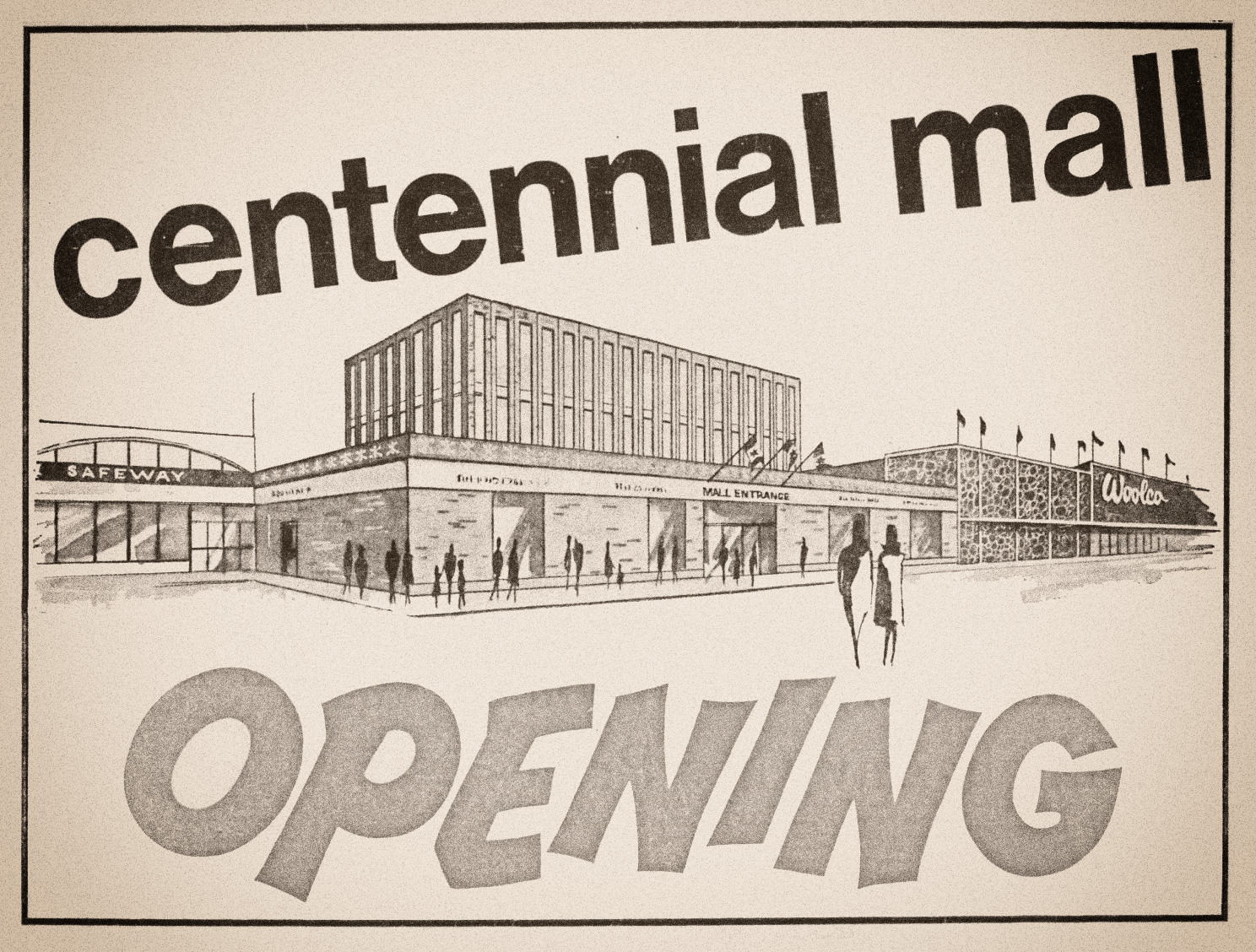 Named after, and built in Canada’s centennial year, Centennial Mall was opened promptly at 9:00 am on November 8, 1967 with an Official Ribbon Cutting ceremony. The almost 300,000 square foot center was anchored by one of Canada’s largest Safeway stores at that time, and the 21st Woolco in Canada, the 2nd in the Edmonton area. Amid the approximately 40 other retail shops and services, there was a copper fountain that looked to be an autumn tree rising from a ceramic tile pool. A Cafeteria opposite that was created to whisk you away to a European street cafe. Give-a-ways included trips for 2 to any destination in the Caribbean and a new 1968 Chevy II Nova. 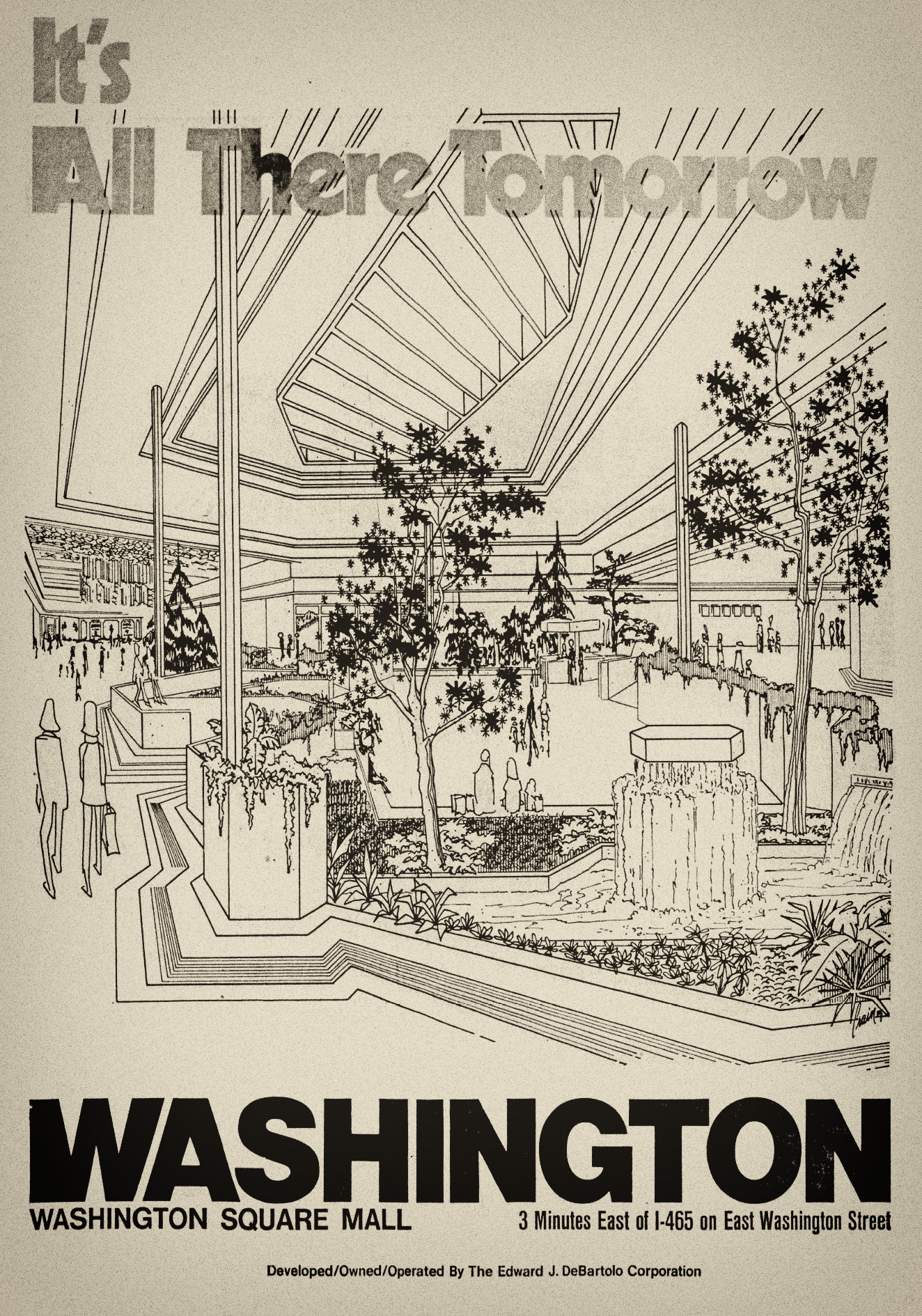 Edward J. DeBartolo’s third enclosed shopping center in Indianapolis, Washington Square Mall was officially opened on October 17, 1974. Not one, not two, but eight cascading waterfalls blended with lush greenery and carpeted brick benches to create much needed rest and relaxation areas. After all this 1.3 million square foot shopping center was designed to hold up to 5 department stores and well over 100 specialty retail shops of all descriptions. Fashions, shoes, books, restaurants, gifts and candy, fabric, jewelry and music stores. Don’t forget a florist, bakery, bank, theater and a drugstore. Also try not to let the eighty-eight, five foot long, suspended mirrored aluminum mobiles in the center court mesmerize you, there is shopping to be done! 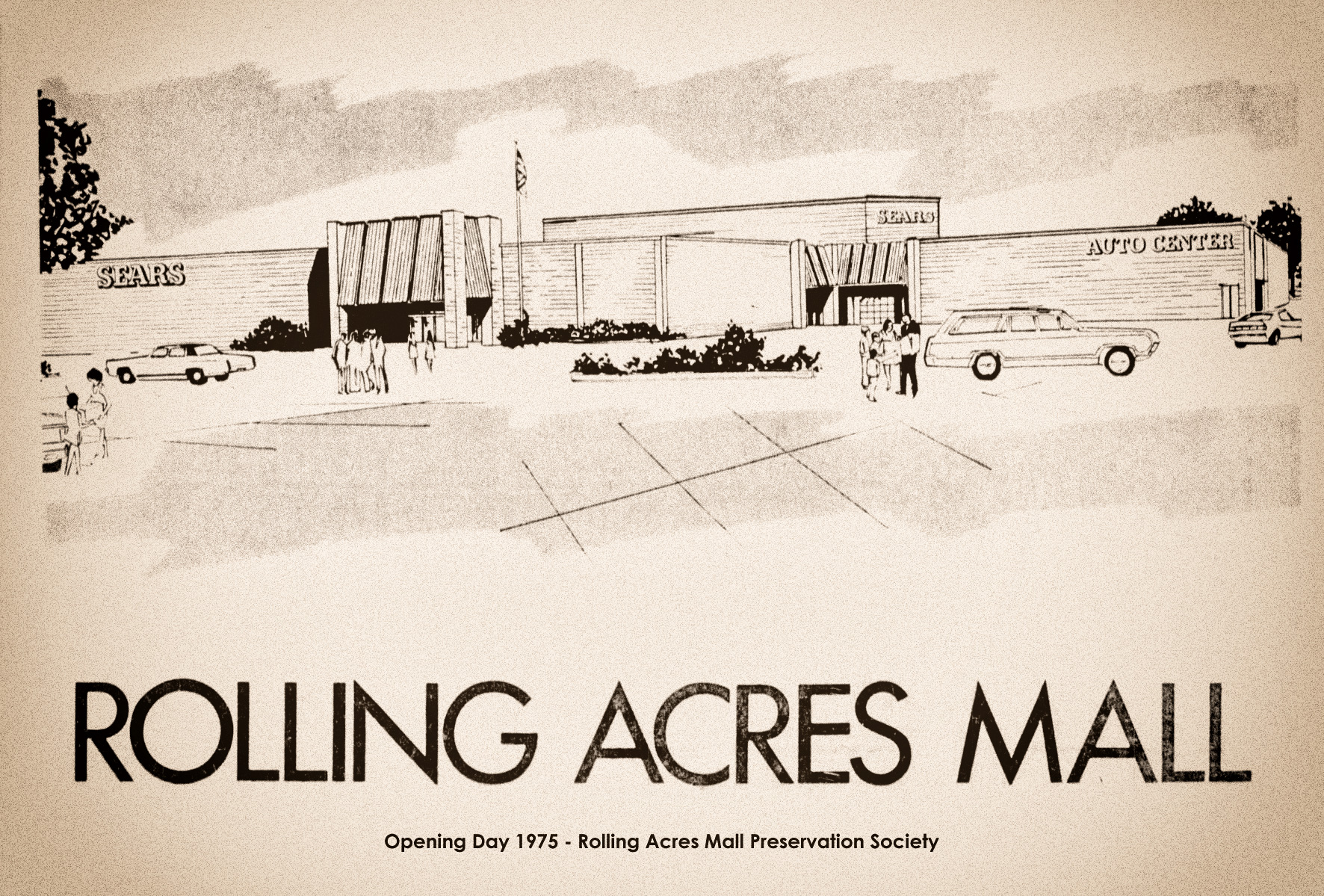 August 3rd, 1975 was a big day for Rolling Acres Mall in Akron, Ohio. In a privately held ceremony Rev. V. Stan Hampson used a thousand-year-old chant to bless the Mall and the Court of the Twelve Trees. Within the Court of the Twelve Trees, the mayor’s wife Ruth Ballard officiated a champagne christening of the Rolling Acres Fountains. This was to launch the Phase I opening to the public on August 6th, 1975. With only one department store and roughly 20 shops and services this was simply a glimpse into what Rolling Acres was about to become. The number of anchors, retail stores and the actual size of the mall continued to grow. Phase II Grand Opening ’76 took place in a little less than a year, in April 1976. 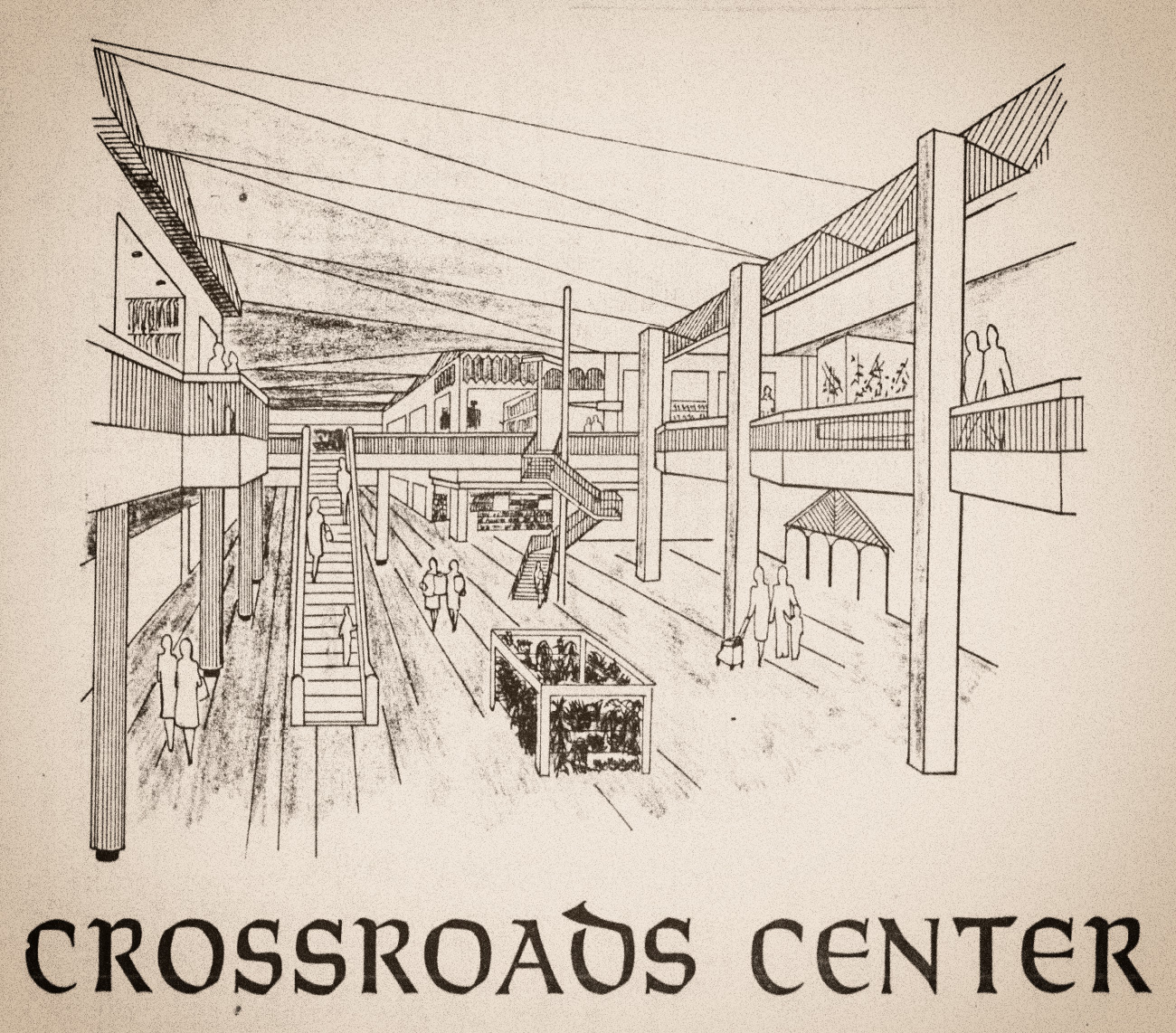 On Wednesday, February 5, 1969 the first business opened at Crossroads Shopping Center in Waterloo, Iowa. With 14 service bays and 40 employees, the Sears Auto Center was open for business at 9:00 am sharp. Other department stores and additional retail outlets would continue to open for a little over the next year. Ultimately on May 13, 1970 Iowa’s then largest, and only two-story mall was officially opened with a total of 38 stores and capacity for close to 20 more. The contractors and sub-contractors were so proud to be a part of building this mall that they donated the Grand Opening Prize, a 1970 Ford Torino GT Hardtop. 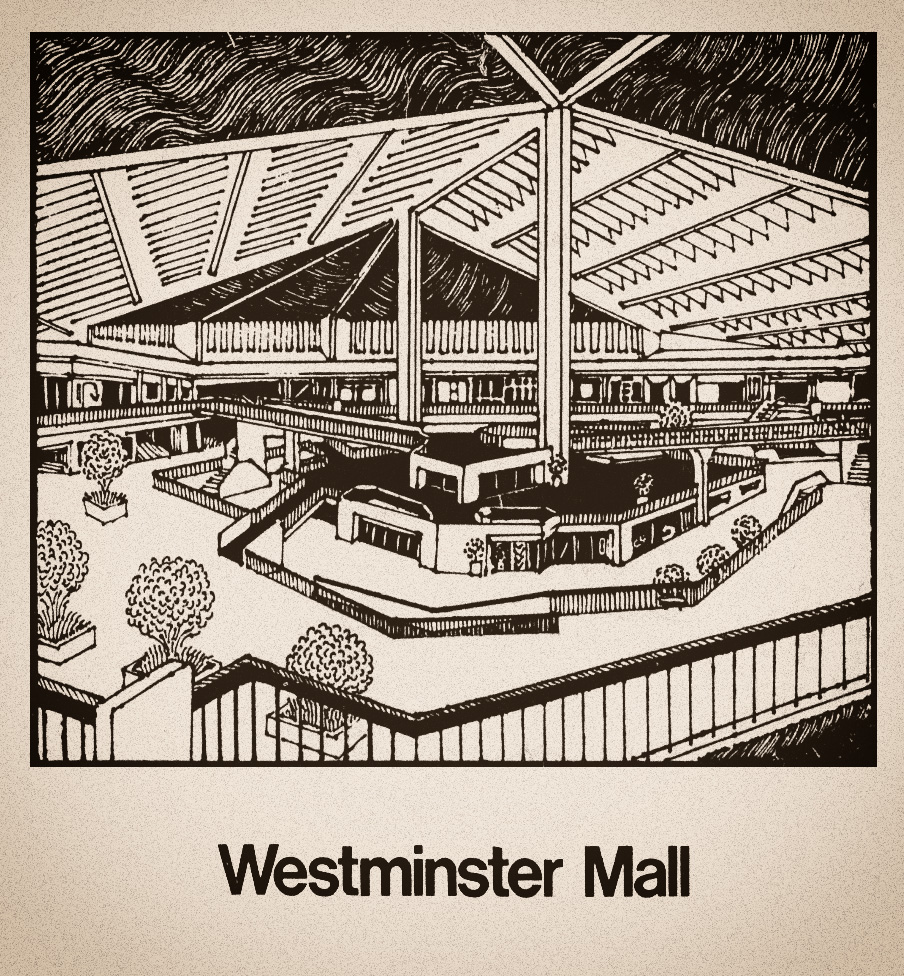 The design intention of Westminster Mall was to be a compact building, reducing the distance between the anchor stores, and making access easier to all mall merchants. To do this a central area was created, a boutique area containing shops that looked out upon the multi-levels. This also gave shoppers easy sight paths to the many other stores. But don’t let the word compact fool you. This 1.2 million square foot center opened on Wednesday, August 7, 1974 with two anchor stores, two more anchor stores slated to open in 1975, and 176 specialty stores and services. With a good blend of both national and regional, one could say Westminster Mall had an outstanding merchant mix. Oh, and there were sculptures, more sculptures than any other shopping center on the West Coast. 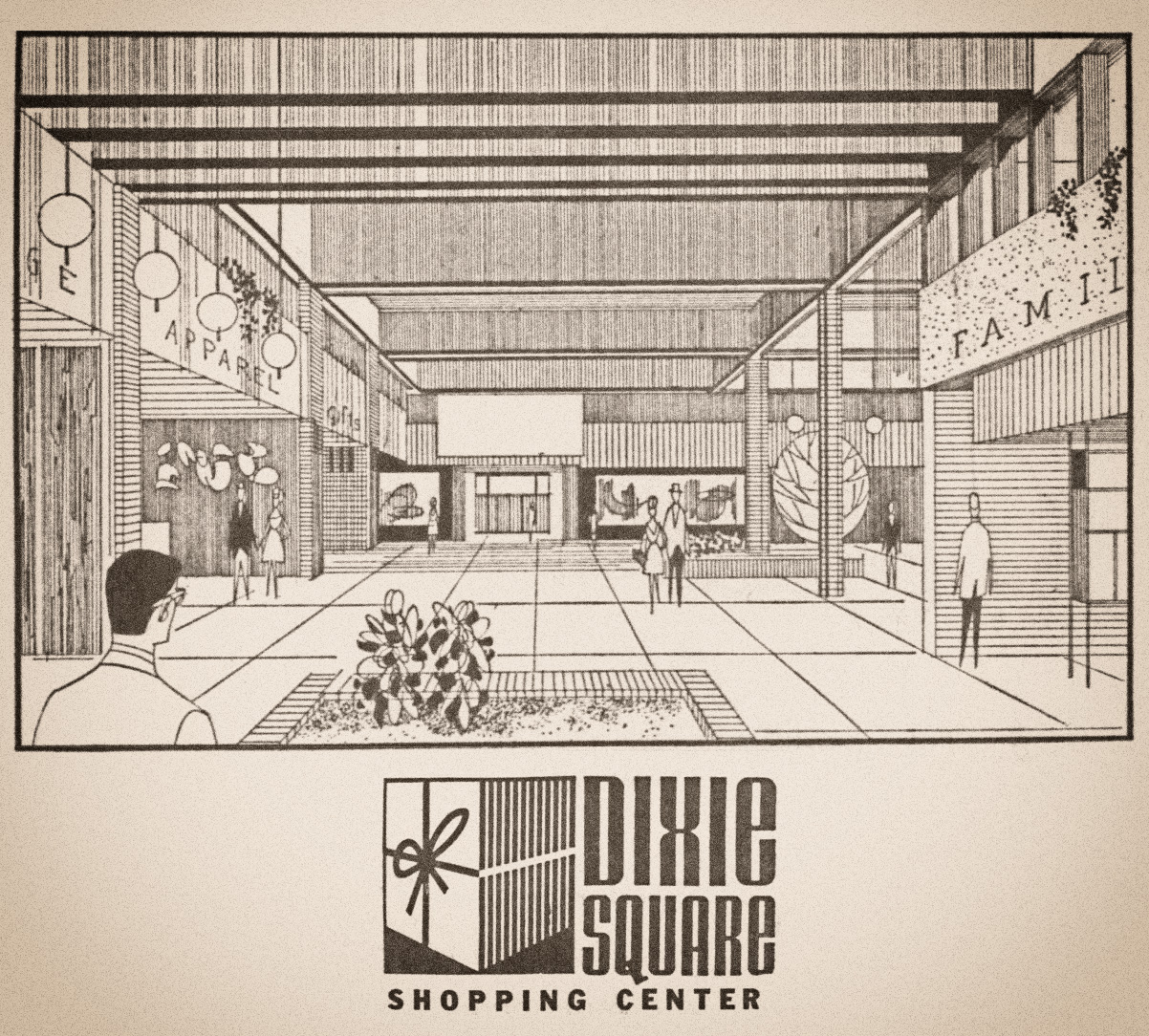 On November 10, 1966, Dixie Square Shopping Center in Harvey, Illinois officially opened with 60 specialty stores and services anchored by JC Penny and Montgomery Ward. Most would consider Dixie Square Shopping Center the first pre-planned enclosed shopping mall in the south suburban area. Four contributing partners, who’s age averages 43, gave this mall forward-looking, clean modern wood-paneled lines, and the “Wonderfall”, which was also a first for the Chicagoland area.  A 21-inch RCA Victor Color Television was given to one lucky shopper.