Originally constructed in 1977, Euclid Square Mall was certainly never the Cleveland area’s biggest or most flashy mall, but it most certainly deserved a better fate than it would eventually suffer.

Could things have been different? Maybe. Let’s look back at some times that could have possibly changed the fate of Euclid Square Mall.

In late December of 1997, The Zamias Services Company would close a deal on the  purchase of ten mall properties from Metropolitan Life Insurance Company. Included in the deal were Euclid Square Mall and 9 other malls scattered throughout the eastern and midwestern states. With the deal the company was looking to grow their already impressive portfolio of 35 shopping centers.

At the time of purchase, Euclid Square Mall was still a somewhat respectable center with vacancy rates at 15%. Though these numbers were below average for the Cleveland market, they were still nowhere near as bad as the 29% vacancy rate at nearby Richmond Mall or the 31% rate at Randall Park Mall. 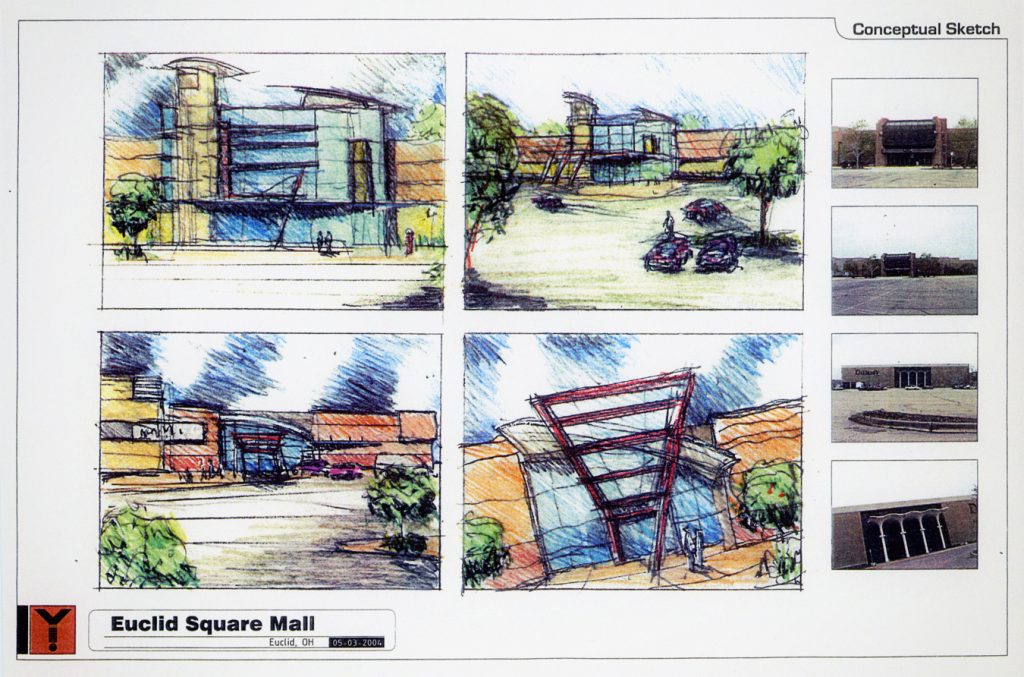 In an effort to improve the vacancy numbers at Euclid Square, Zamias Services did a study of the mall which looked at multiple renovation and redevelopment plans for the property. Some of these plans included a complete renovation, a conversion to a power center, completely demolishing the mall and repurposing the site into an apartment community, and one plan even looked at turning the site into a golf course.

Sadly, none of these ideas ever came to fruition. One year later the mall would lose a major anchor when Kaufmann’s would relocate to the nearby and newly renovated Richmond Mall. This loss would only help contribute to the soon to be rapid rise in vacancy.

Even after losing an anchor there still may have been a chance of turning the place around as the mall still had some signs of life but by 1999 it had seemed that Zamias Services had given up. Shortly later in 2000 Zamias would sell the mall to North Carolina real estate investor Haywood Wichard.

Haywood not only looked like a business class villain from an 80s movie, he also played the part to near perfection. He cared zero about the mall, the jobs it created, or the people that worked there. He cared only about one thing and that was turning a profit on his investment. Mr. Wichard was quoted in the Plain Dealer as saying “We are willing to sit there and hold it until a use comes along. Somebody will come along eventually who will need that property.”

In just a year under Haywood Wichard’s ownership vacancy rates soared to 87%. By 2002 the mall’s remaining anchor, Dillard’s, converted the store to a clearance center and closed off access to the second level of the store. In 2004 Haywood eventually gave up the idea of ever turning a profit on the property and sold the mall at a loss to local businessman Ted Lichko.

Whereas Haywood Wichard seemed like a villain, Ted Lichko seemed like the unlikely hero that Euclid Square needed to save it from certain doom. Lichko was mostly known operating United Furniture but also was in the business of purchasing run-down brick apartment buildings and rehabbing them into safe, affordable housing. He had even bought and turned around Conneaut Shopping Center so it seemed like he could really make this happen. 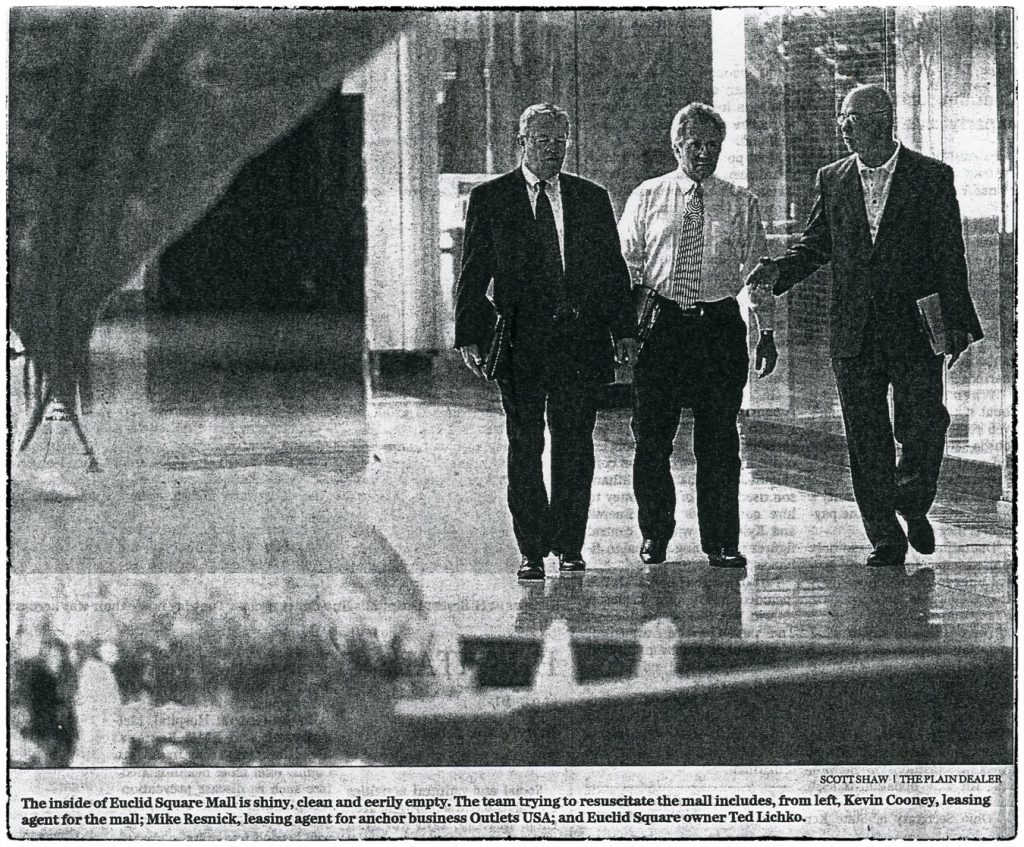 Lichko’s first plan was to fill the other vacant anchor store. His idea was Outlets USA. Despite the name, Outlets USA was not your typical factory outlet, but more of an upscale flea market set in a department store consisting of a gallery of vendors selling wares such as furniture, cigarette lighters, tires, and scratch and dent appliances. Outlets USA would feature 150 spaces for vendors on the first level of the former Kaufmann’s store and if that was filled up they would open up the second level.

Next, Lichko would focus on revitalizing the mall’s interior. His first order of business was to reactivate the beautiful fountain system. He put his team to work to clean up the mall interior and get the stores into move-in ready condition. Lichko hoped that the mall could rebound by using a “main street” mix of offices and stores. Lichko even had educational organizations evaluating areas of the mall as potential business school campus.

Initially Lichko’s plan would pay off. Outlets USA’s grand opening weekend would attract nearly 13,000 customers. One of the food vendor’s, “The Dog House” actually ran out wieners! It was a hit and customers even commented to the Plain Dealer on how great it was for the mall to be back open and about how wonderful the mall looked.

The success however wouldn’t last. Outlets USA would close just two years after opening, with Litchko citing that the vendors were a bad mix with the mall. And just like that, the mall was headed back on it’s course of failure.

And that is basically the end of the line for Euclid Square. Though it did have somewhat of a resurgence as a place of worship. In 2013 there were as many as 24 different churches located in the mall. However in 2013 the mall also lost it’s last retail client when the Dillard’s Clearance finally closed its doors.

In 2016 the mall would be condemned by the city of Euclid and a year later demolition would begin.

So, could things have been different for Euclid Square? Maybe. But with fierce competition from upscale centers like Crocker Park and Legacy Village it would be hard to imagine a world where Euclid Square would still be a successful shopping mall. Heck, even Richmond Mall who underwent major renovations is now closed.

Retailers Higbee’s and The May Company, along with developer Jacobs, Visconsi, and Jacobs were looking to build a shopping center on the property of the Chase Brass Company located on Babbitt Road. However with that property currently zoned for industrial use, the decision would be left up to people of Euclid to decide if the land should be rezoned. So it was put it to a vote in 1973 with the result being nearly two to one in favor of the mall.

The mayor at the time, Harry J. Knuth, who was a long time champion of the project considered the mall “One of the greatest things that ever happened to the city of Euclid”. Richard E. Jacobs, President of Jacobs, Visconsi, and Jacobs added that the malls developers “want to prove to each resident of Euclid that the city will benefit from this development and become an even better place in which to live in the years ahead”.

Mr. Jacobs was right. The Euclid Square Mall would eventually open in 1977 and pay immediate dividends in the creation of nearly 2,000 jobs, plus huge increases in income to the city from real estate tax on the new mall which helped the city avoid raising its taxes.

Here are 10 scans of retro advertisements from beyond the dead mall graveyard out of a 1987 issue of Euclid Square News.

Mothers may trust Stride Rite but kids are certain to hate their mothers when they are forced to wear these ridiculous shoes. 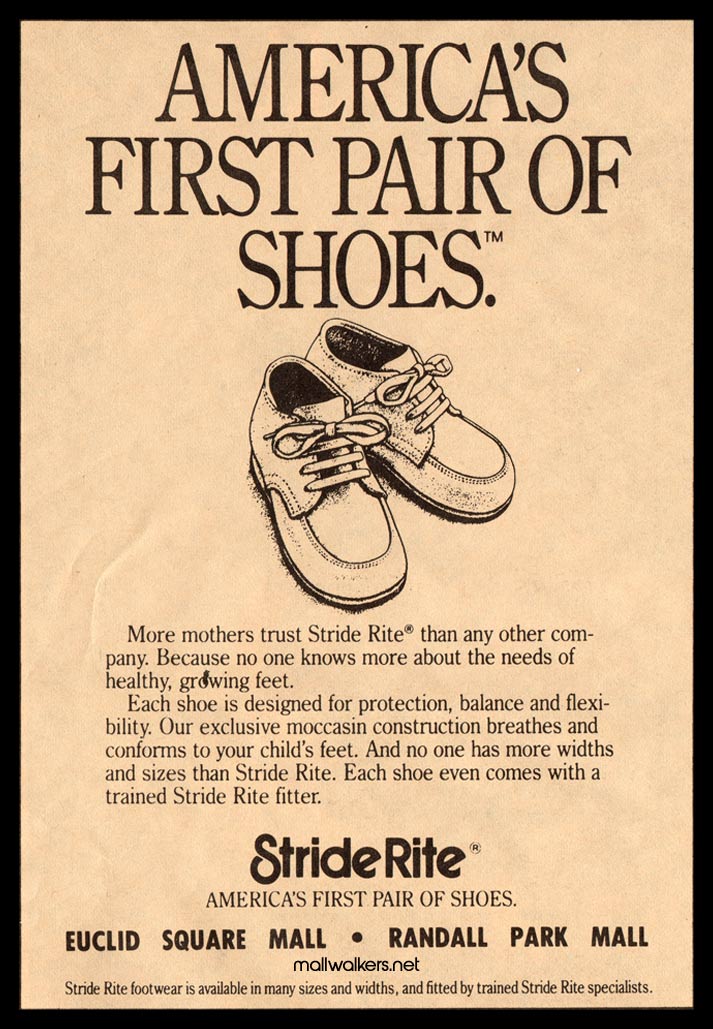 If a flower is worth a thousand words, you can say I love you four thousand times with a dozen roses for 18.95…What a great deal! 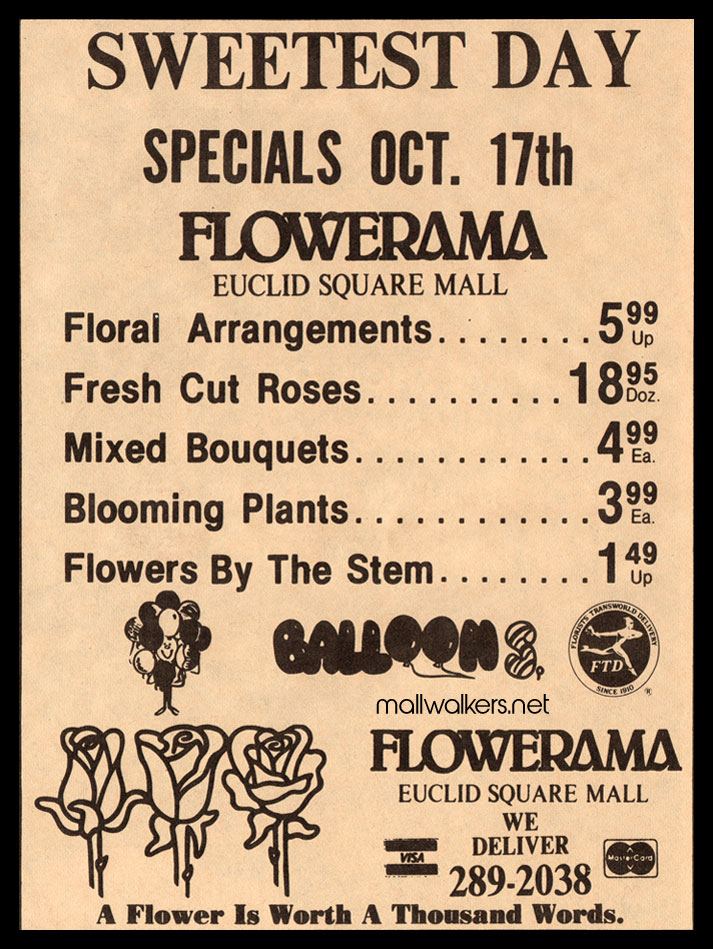 “If you still have fleas you need to see us”…lol 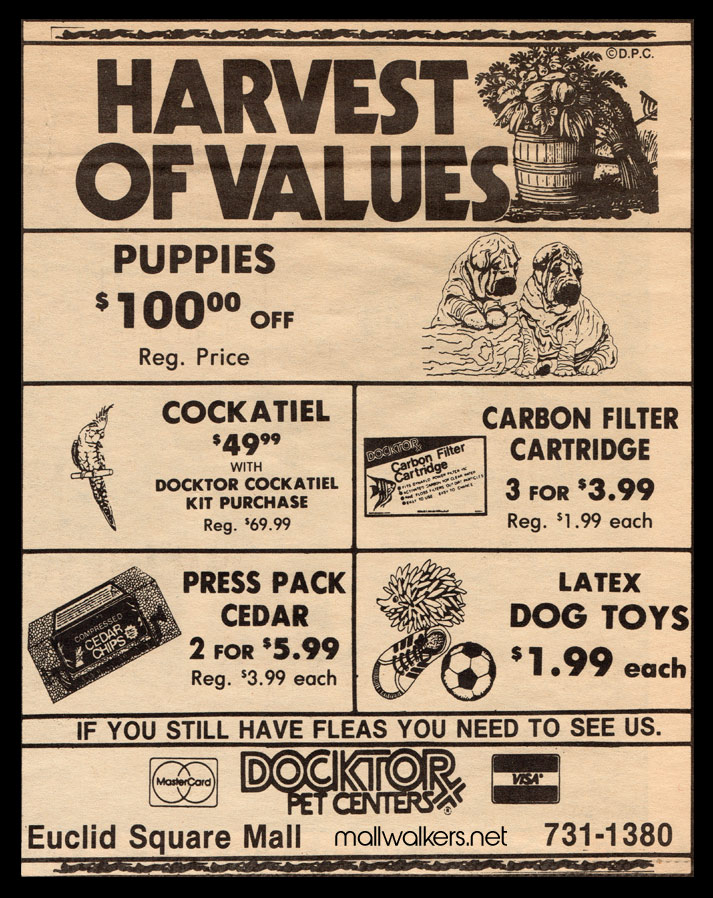 Why did these ever go out of style? Seems like everybody’s grandad had one of these on the side of his Lay Z Boy recliner to keep all of the remotes in order. 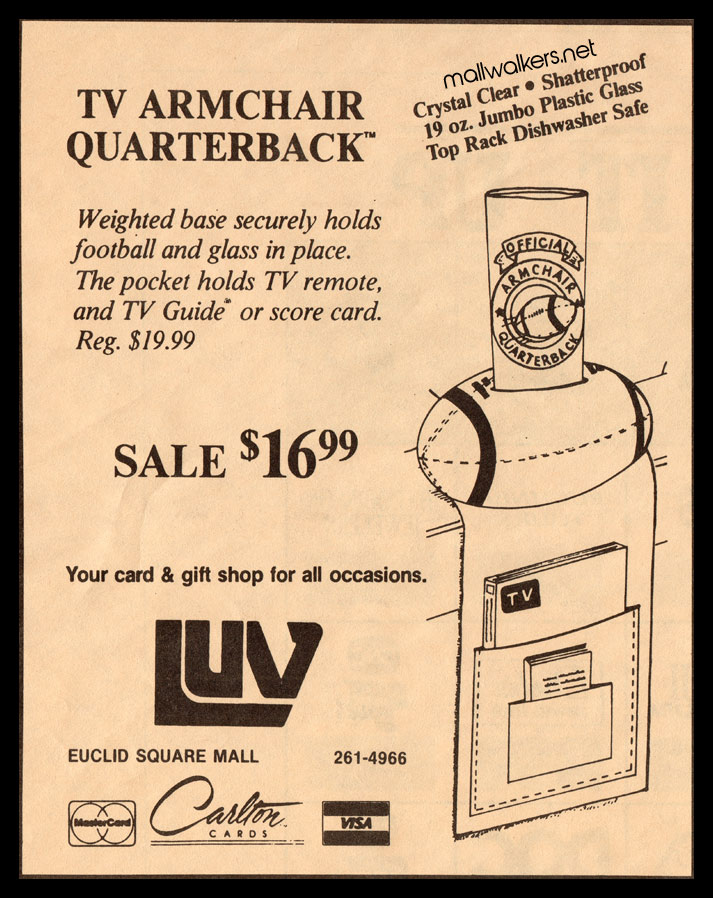 I felt somewhat uncultured when I had to Google “canapes”…after seeing what they are I don’t feel so bad, they look gross. 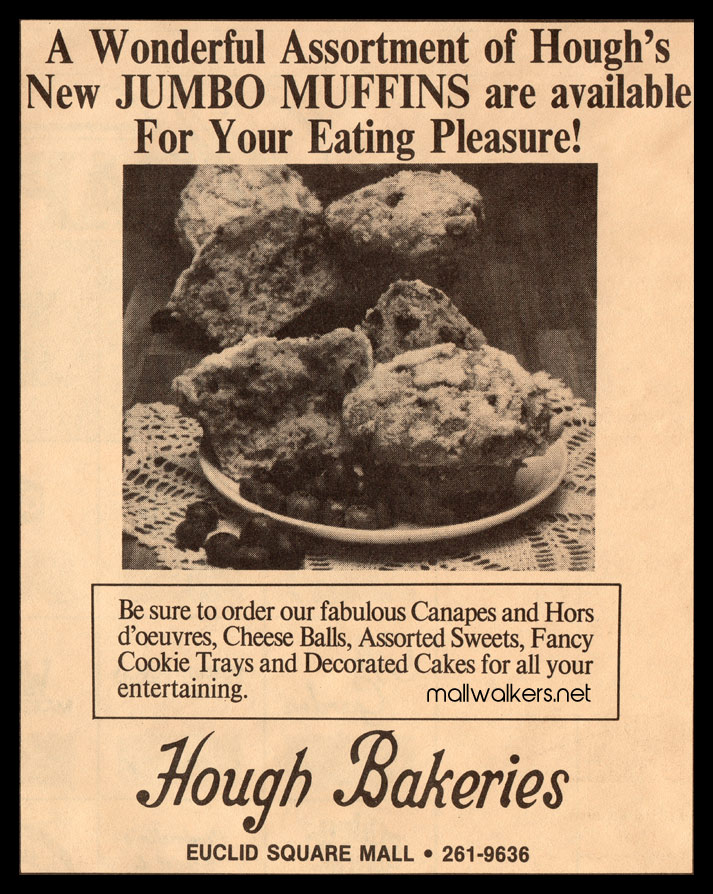 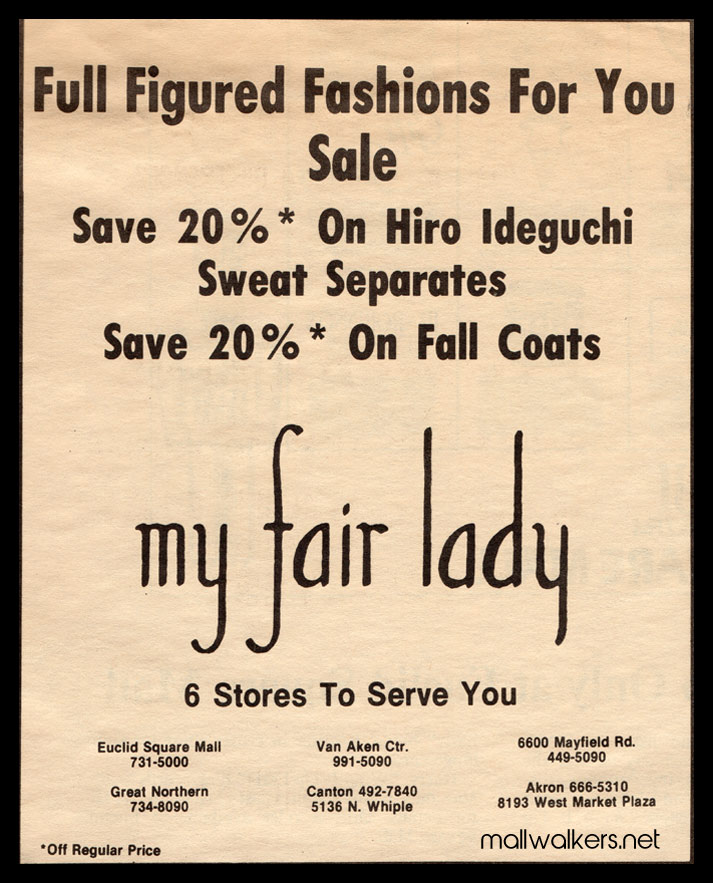 Gift shopping would have definitely been an art at “The Gallery” if this Waterford crystal is the most exciting thing they have going for them. I really had to think about the SALE catch phrase on this ad for a while and I’m still not sure I get it. 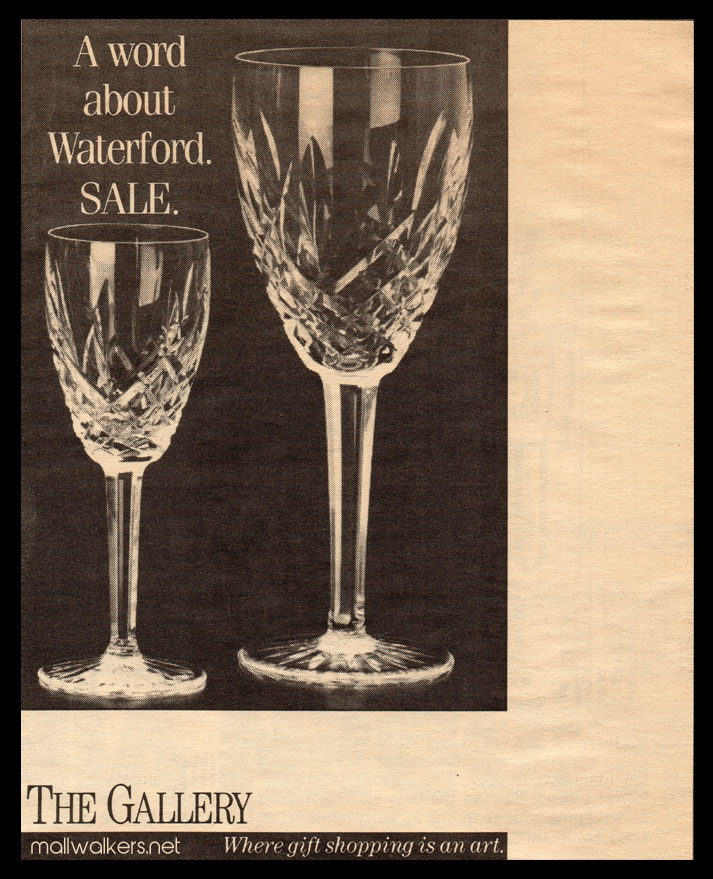 This is actually a really good coupon, both the Karmelkorn and CheeseKorn were really good from what I can remember,  not sure I would pass out Popkorn balls at Halloween though. After a Google search I was pleasantly surprised to find Karmelkorn is still in business. 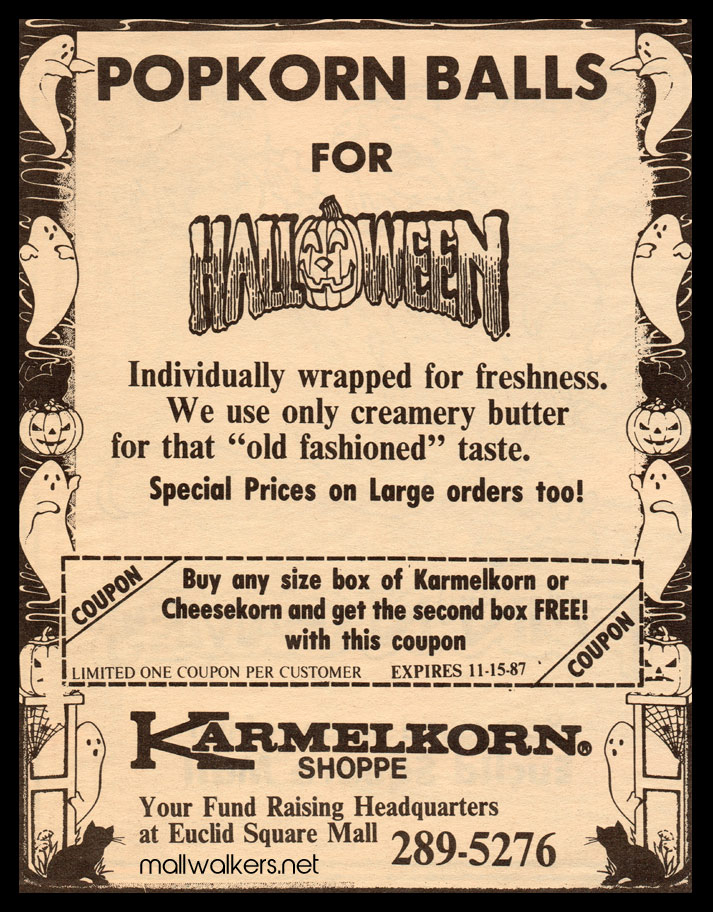 A Mall food court staple even though Euclid Square Mall didn’t have a traditional food court. Taco Bell is actually pretty tasty in a pinch but I have to question the quality of the steak…But seriously, can you guys just bring back those Cinnamon Crispas already! 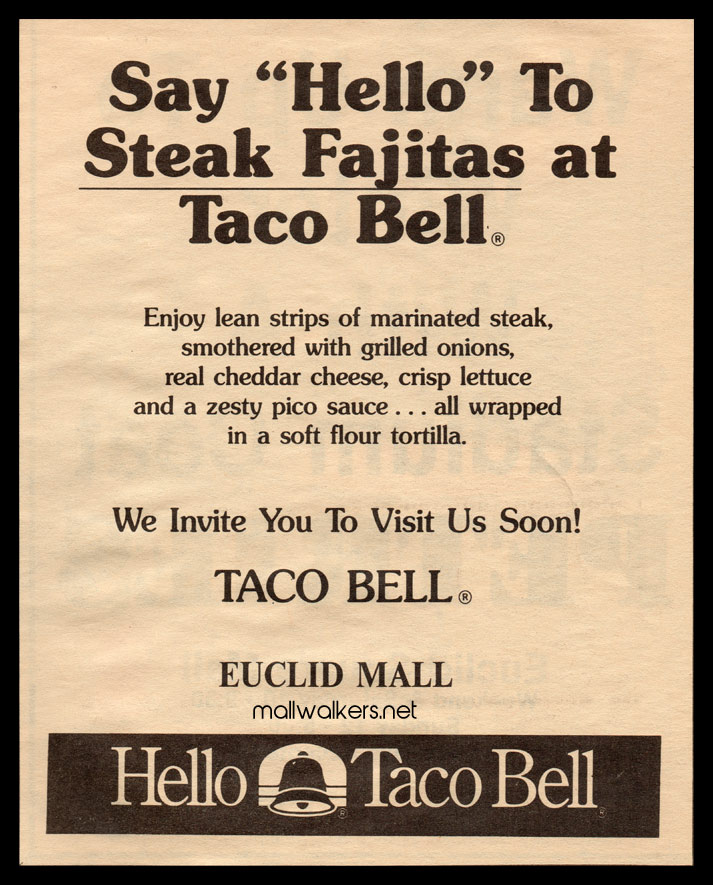 The coolest thing I remember about the mall one hour photo places was that your photos would go by individually on a conveyer type machine as they were printed, and you could stand at the storefront window and watch. It was also nice that “Double Prints” were always included. 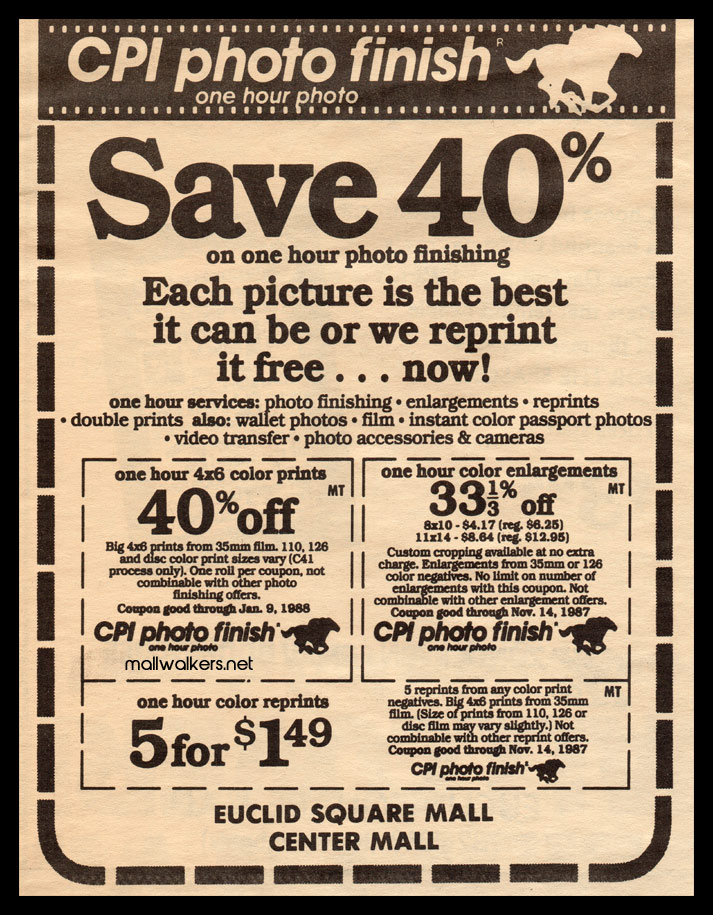 Be like yourself or be different with one of these Euclid Square Mall shirts from Untitled Colours.