Mellett Mall (later Canton Centre) in Canton, Ohio would open for business in 1965 and shortly after in 1968 Radio Shack would follow suit and sign their first lease with the mall. At the time of opening, Radio Shack’s offerings included the sale and servicing of high fidelity stereos, citizen band radios (CB), televisions, tape recorders, and electronic components, equipment and supplies.

In 1984 Radio Shack looked to move its store to a new location and they would land next to Abbott’s Cards and Gifts in the malls east wing which was anchored by Montgomery Ward. The blueprint pictured is the architect’s elevation drawing and floor plan for that relocation.

In 2001 Montgomery Ward would go bankrupt and close their store at the mall putting the future of the entire wing of the mall in jeopardy. Under new management the land that the east wing stood on was sold to Walmart.

Despite multiple attempts from mall management to relocate, Radio Shack would stay in this location until the wing was closed for demolition forcing management to terminate their lease.

Interestingly, the malls breaking of the lease with Radio Shack would end up costing ownership 40,000 dollars due to a clause in the original lease. 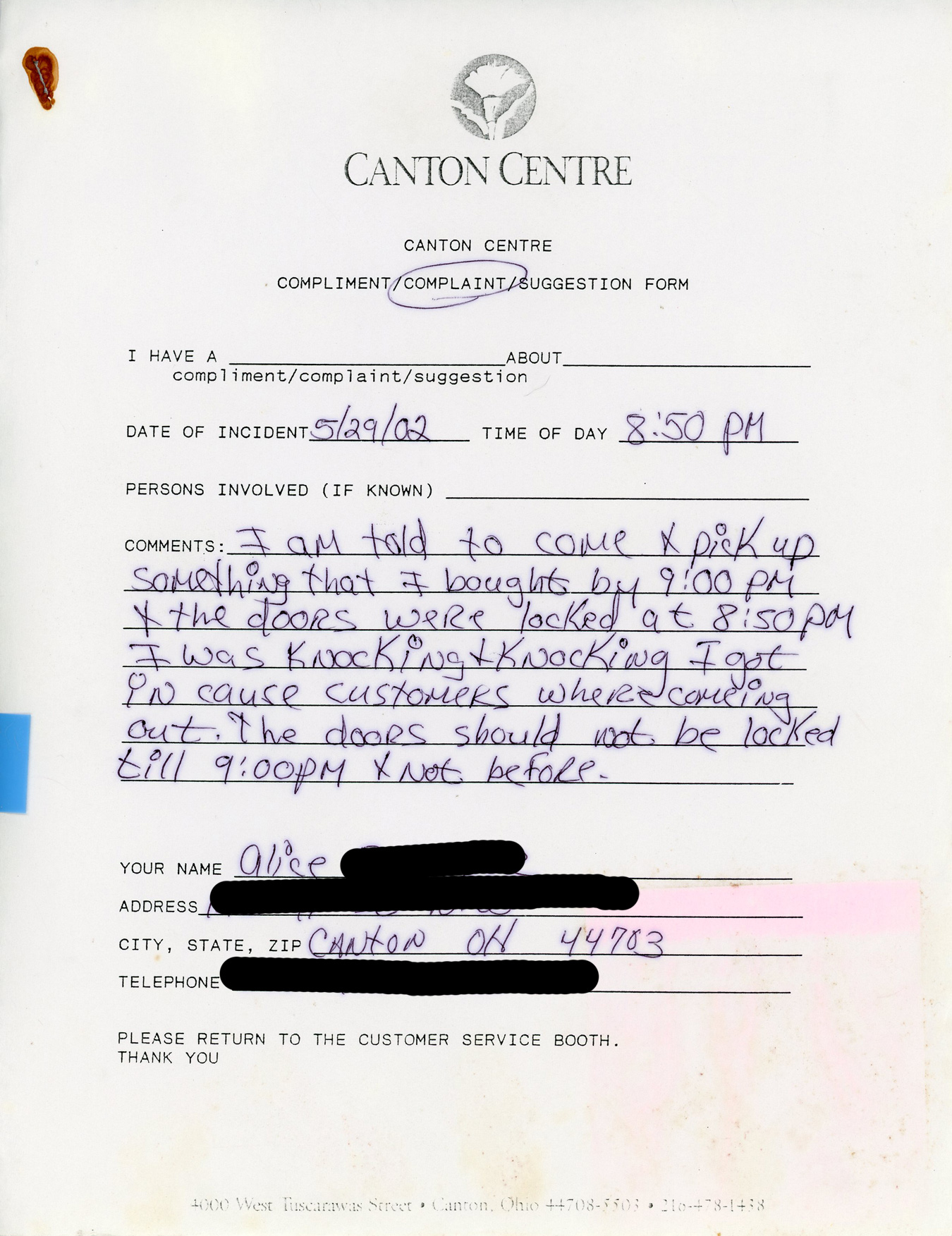 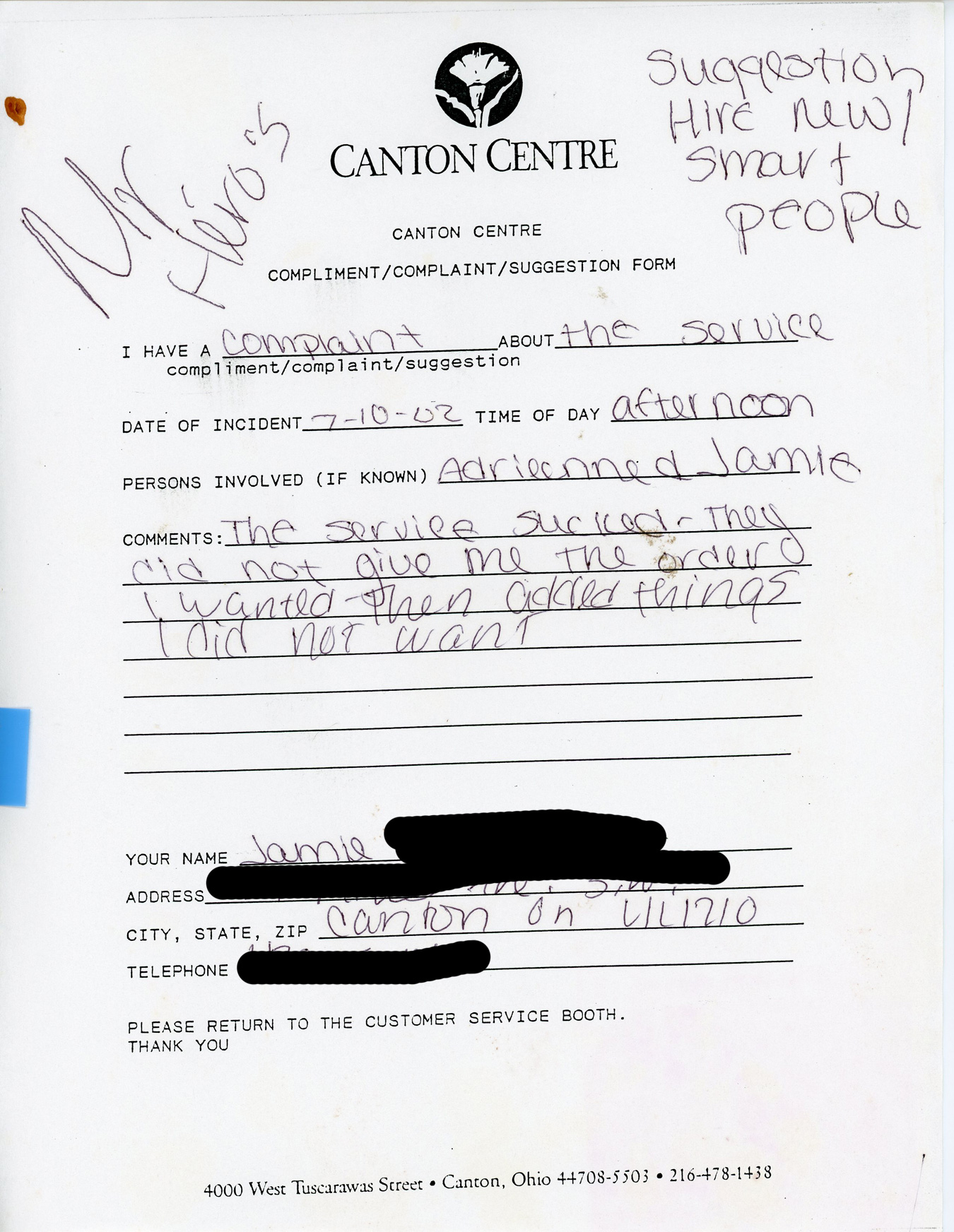 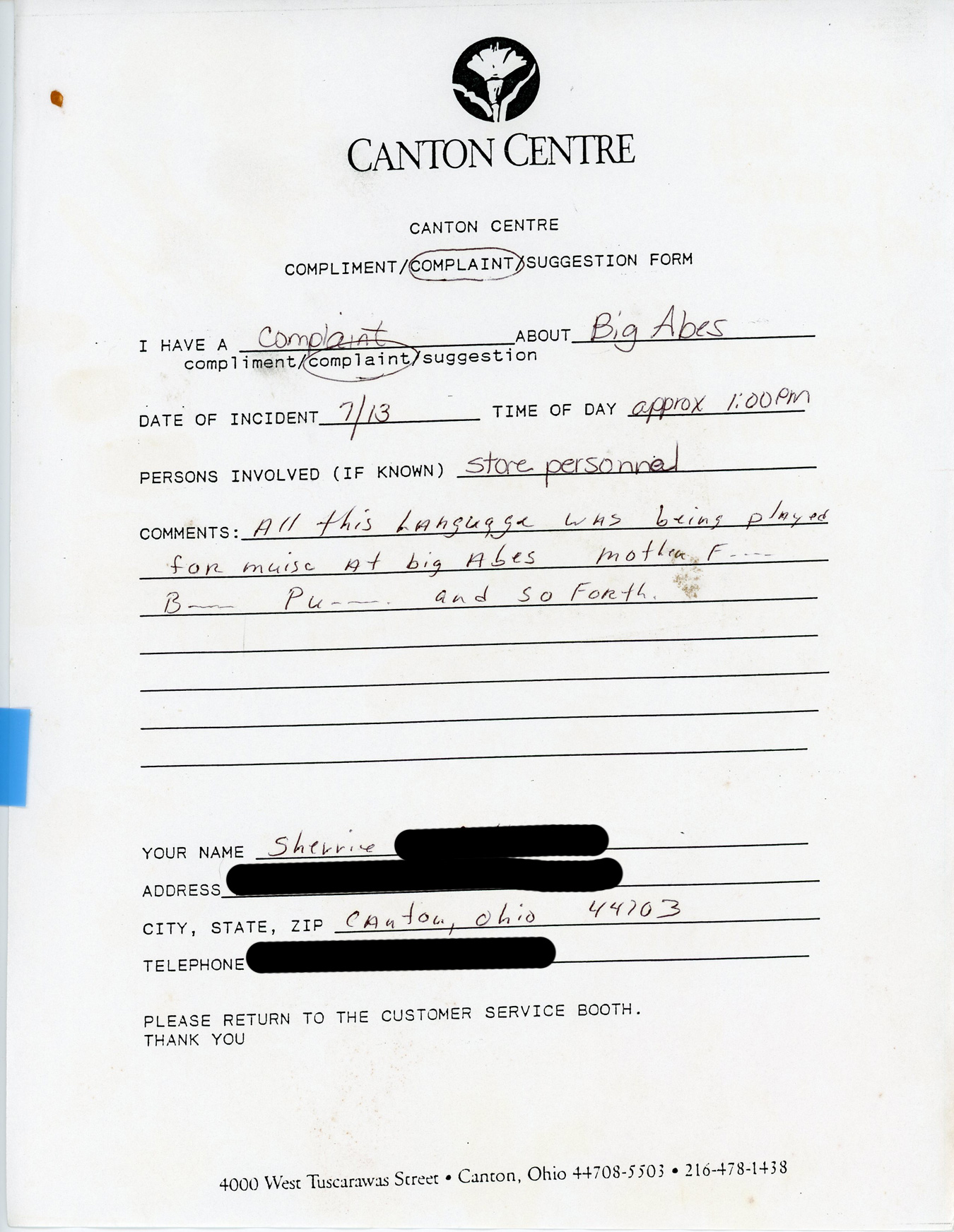 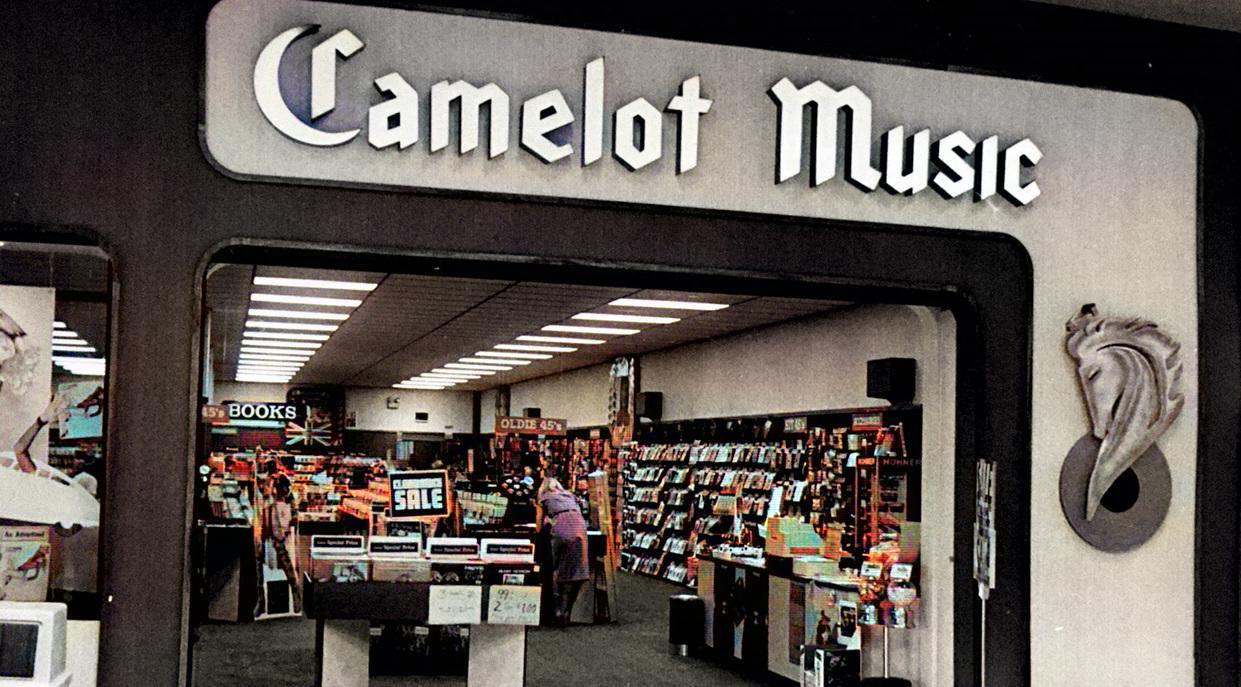 I don’t ever remember going to the mall for a specific event, but I sure remember showing up on a Saturday only to find vendors have invaded the mall. They were everywhere. But there were always plenty of people there happy to browse. One of those people could have been Chris Crossan from the Facebook Mellett/Canton Centre Mall Group, a true scholar of the Canton Centre Mall and someone who understands the pure enjoyment of a good mall event. So with his help let us browse through the Canton Centre auto show, 1996. 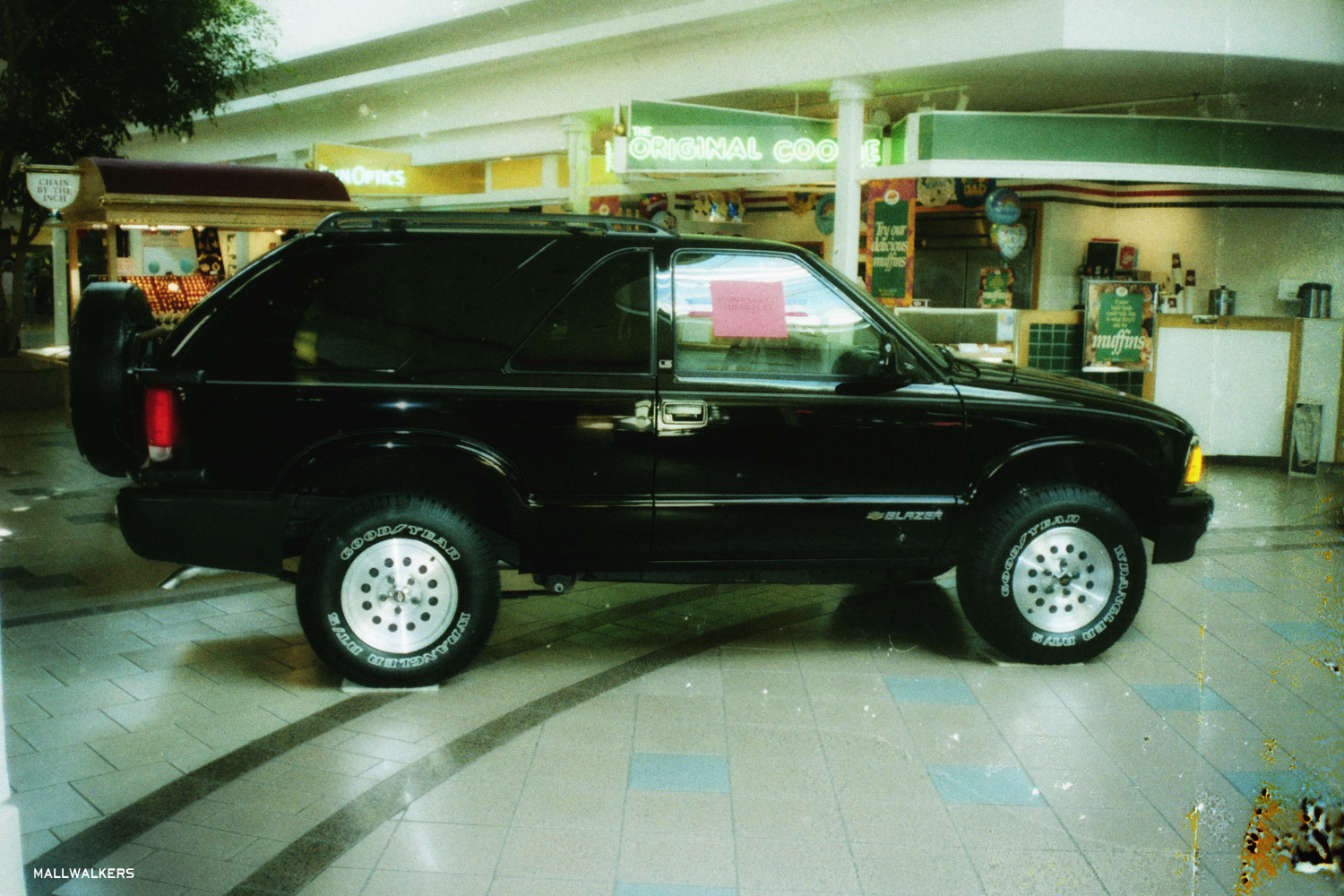 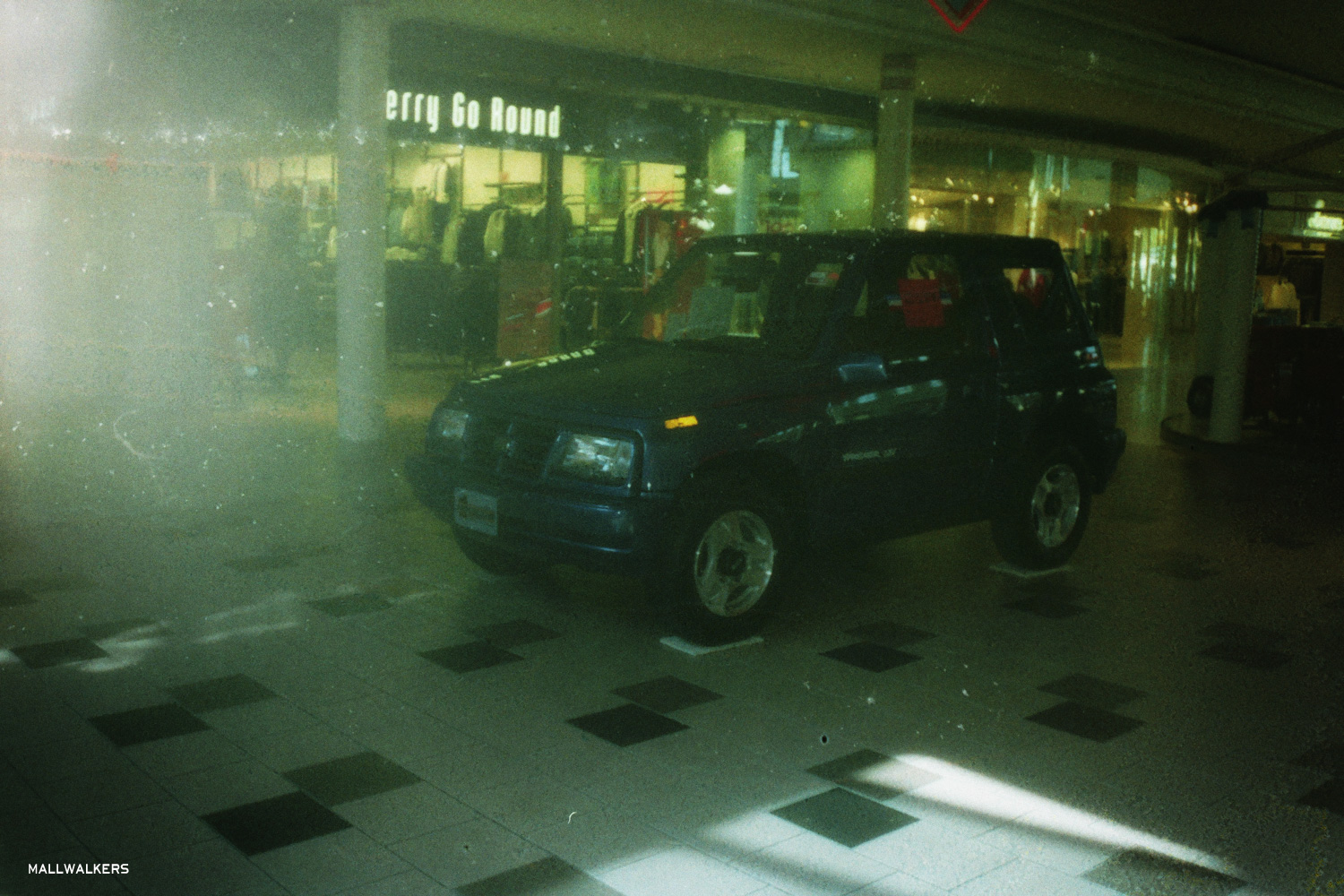 Progressive had other prime display locations and knew how to use them. Placing a 1997 GEO tracker right in front of the Merry Go Round. 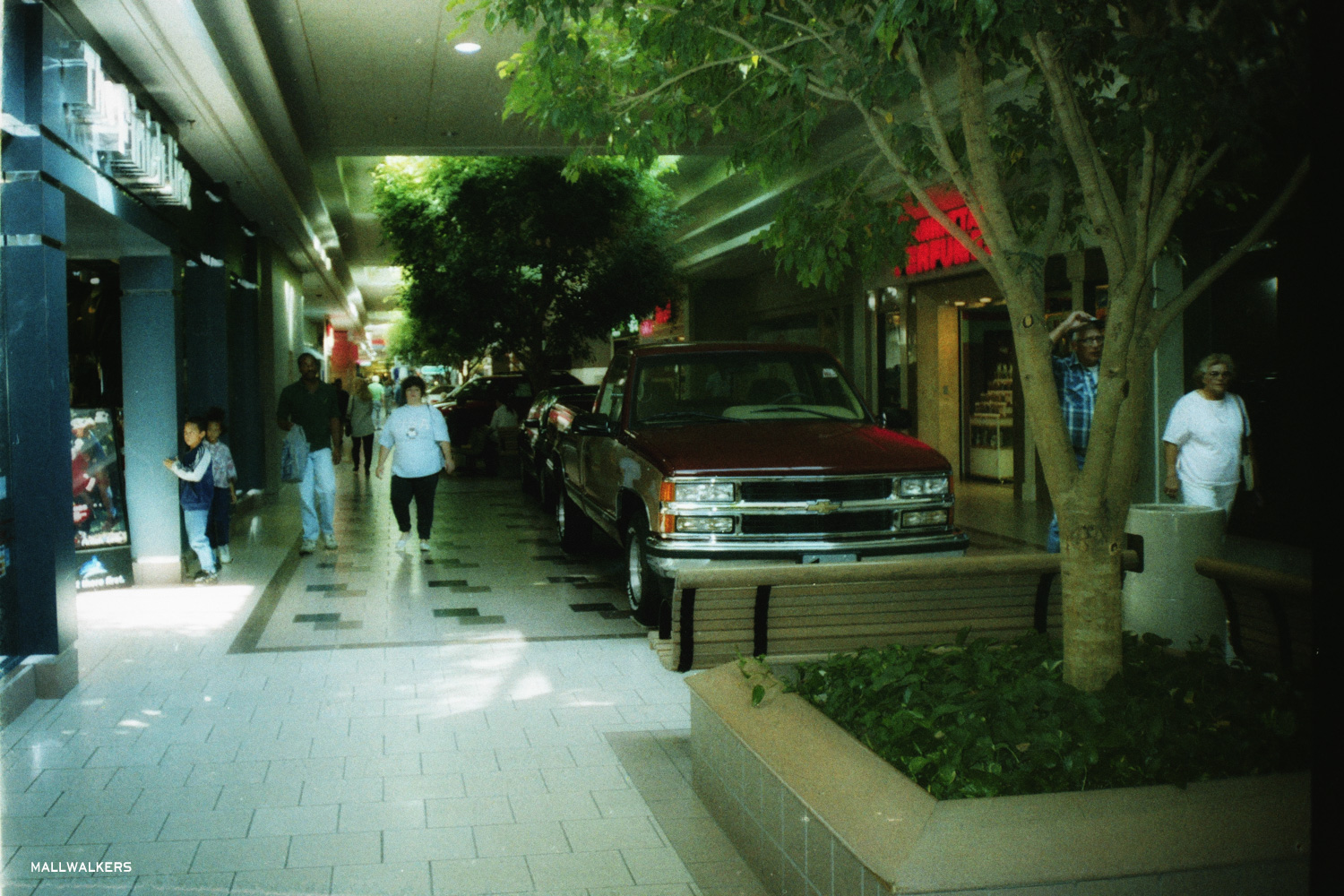 And a new 1997 Chevrolet Silverado outside The Finish Line tucked away in the outdoor elements. In January of 1997 The Finish Line Store would re-open down the hall, next to Camelot, after Rite Aid vacated their retail space. 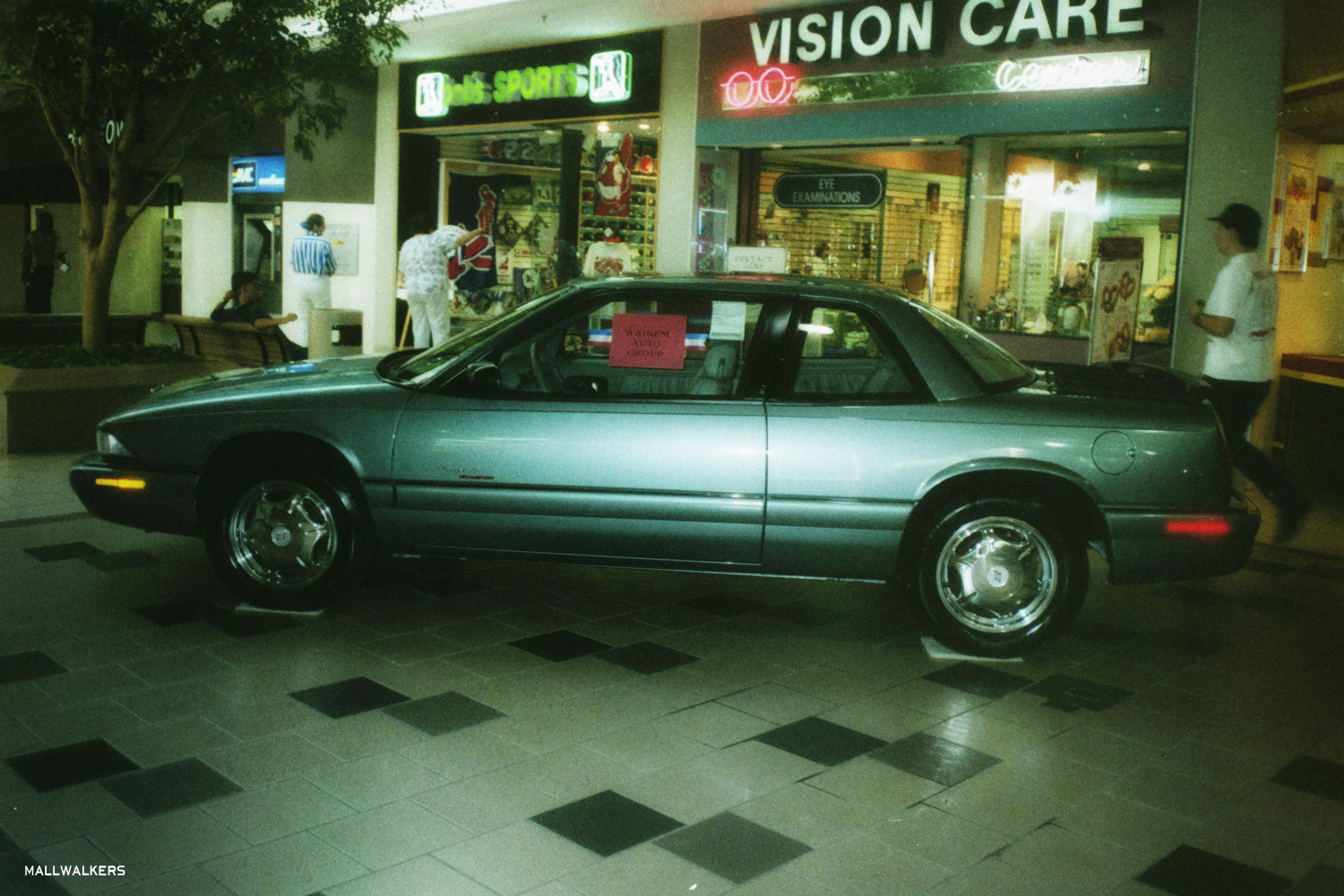 Vision Care, which would later become the Mall Office, and Bob’s Sports make a beautiful backdrop for this luxurious Buick Regal from Kempthorn Buick’s stock. This 1997 model was the last for the two-door Buick Regal. Kempthorn, another family owned dealership, started in Canton in 1938. In 1982 they acquired a Buick dealership on Market Ave N. where Kempthorn Buick would remain until 2013. 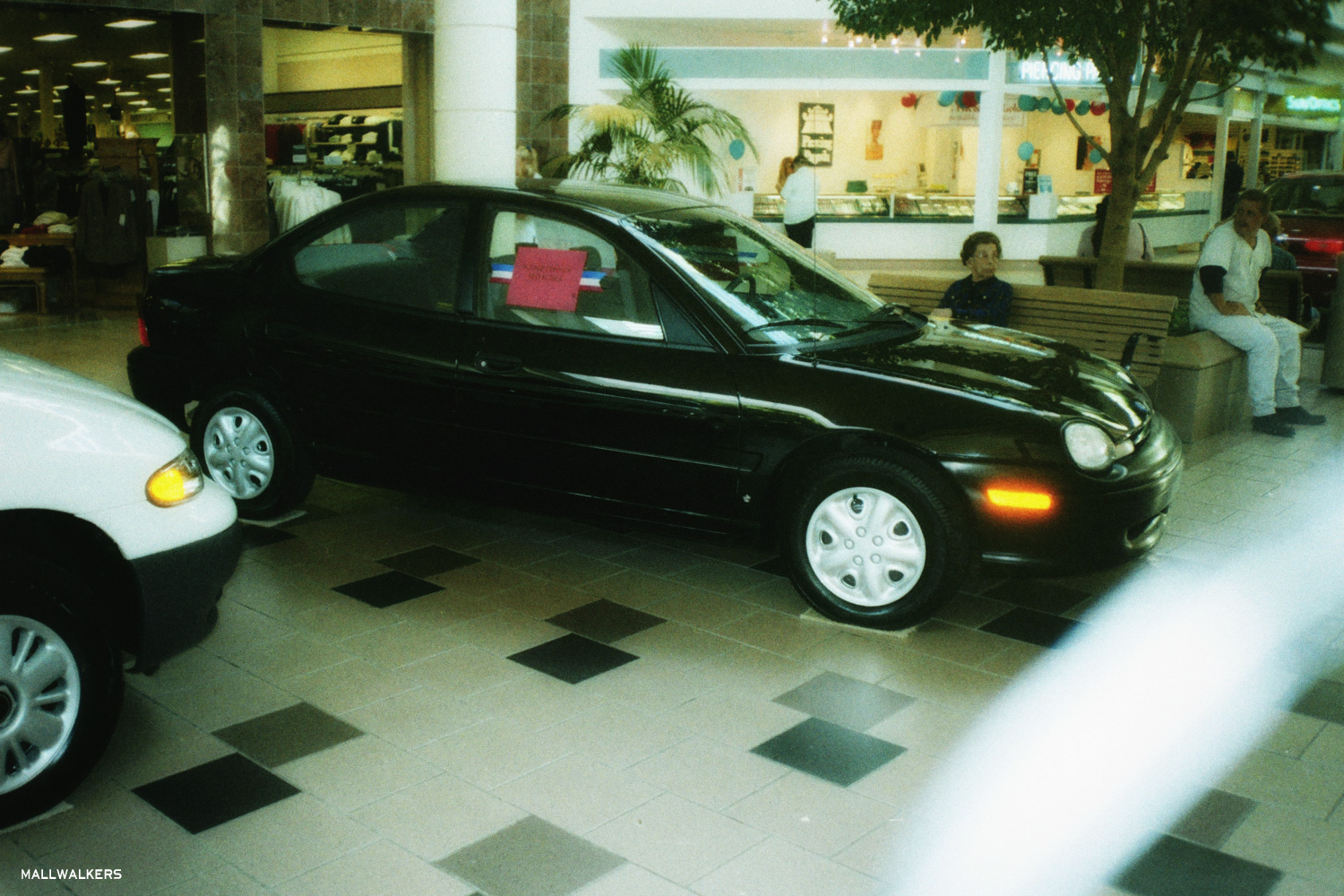 A new 1997 black Dodge Neon and part of white Plymouth Voyager give these gentlemen something different to look at as they patiently wait for their shopping buddy to finish up in JCPenney. The Piercing Pagoda in the background would ultimately move to the left of the JCPenny entrance with Added Touch taking over the open retail space. 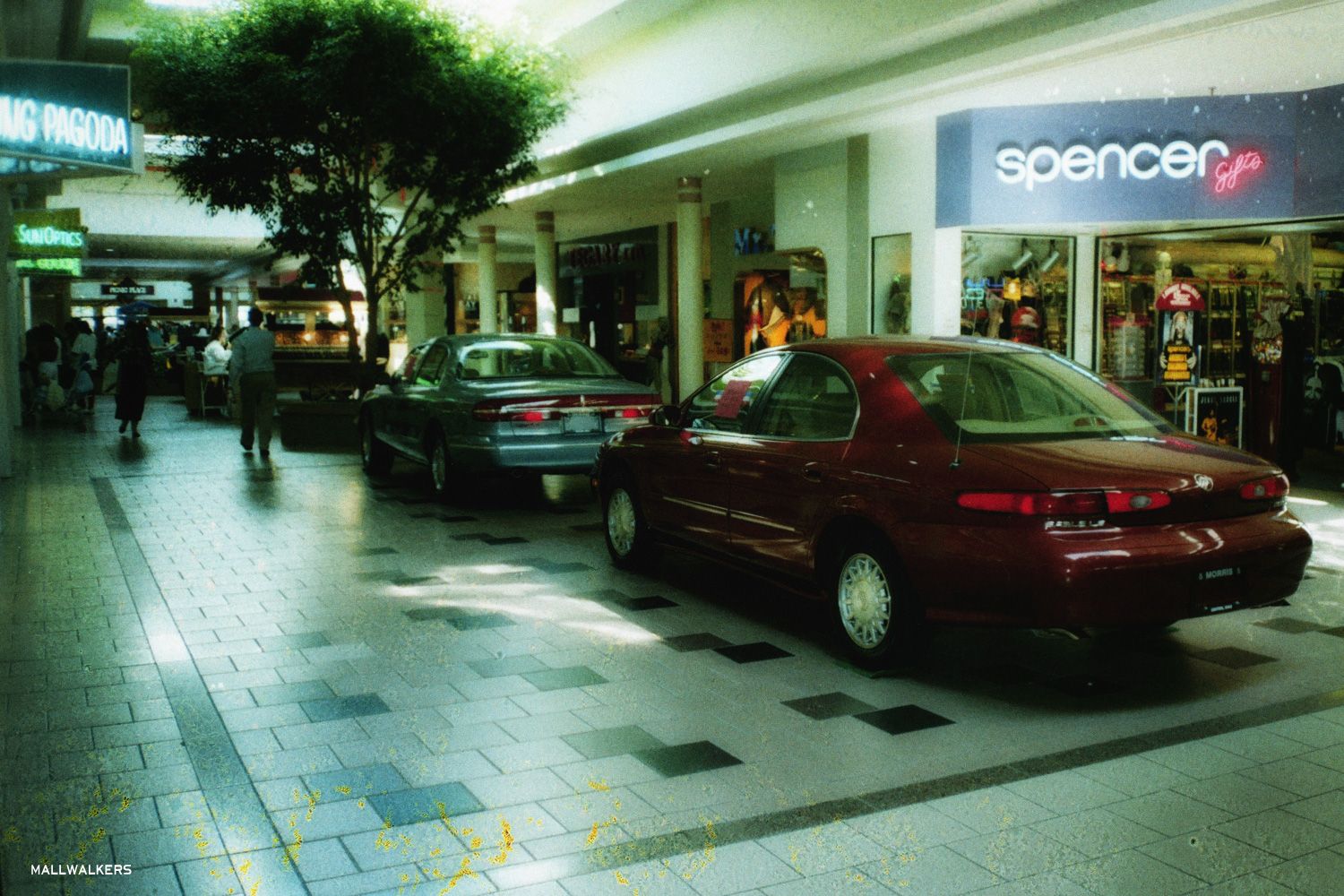 Dividing the path between the Piercing Pagoda and Spencer Gifts is a Mercury Sable and a Lincoln Continental. These cars courtesy of the Lincoln Mercury dealership that was located in downtown Canton, next Ewing Chevrolet. 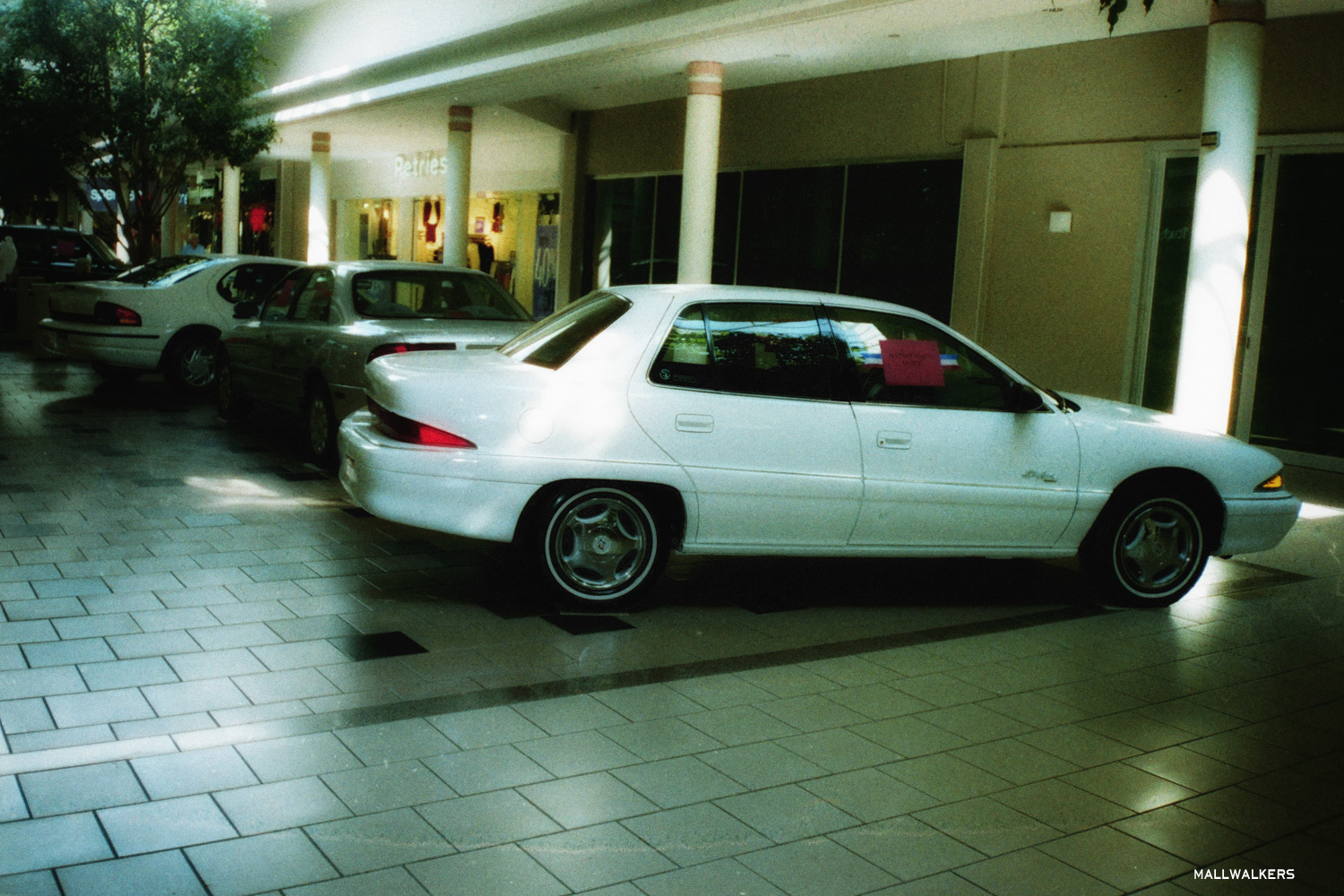 Ewing Chevrolet, once the largest Chevy dealership in Stark County and one of the oldest family owned dealerships in the area, would routinely set up in the hall between Woolworth’s and Payless. A Buick Skylark, this one a freshened version of the 1992 Skylark, can be seen sitting in front of the shuttered Woolworth’s Store. To the left is a new Mazda 626 and the back-end of a white Dodge Status can been seen in the distance. 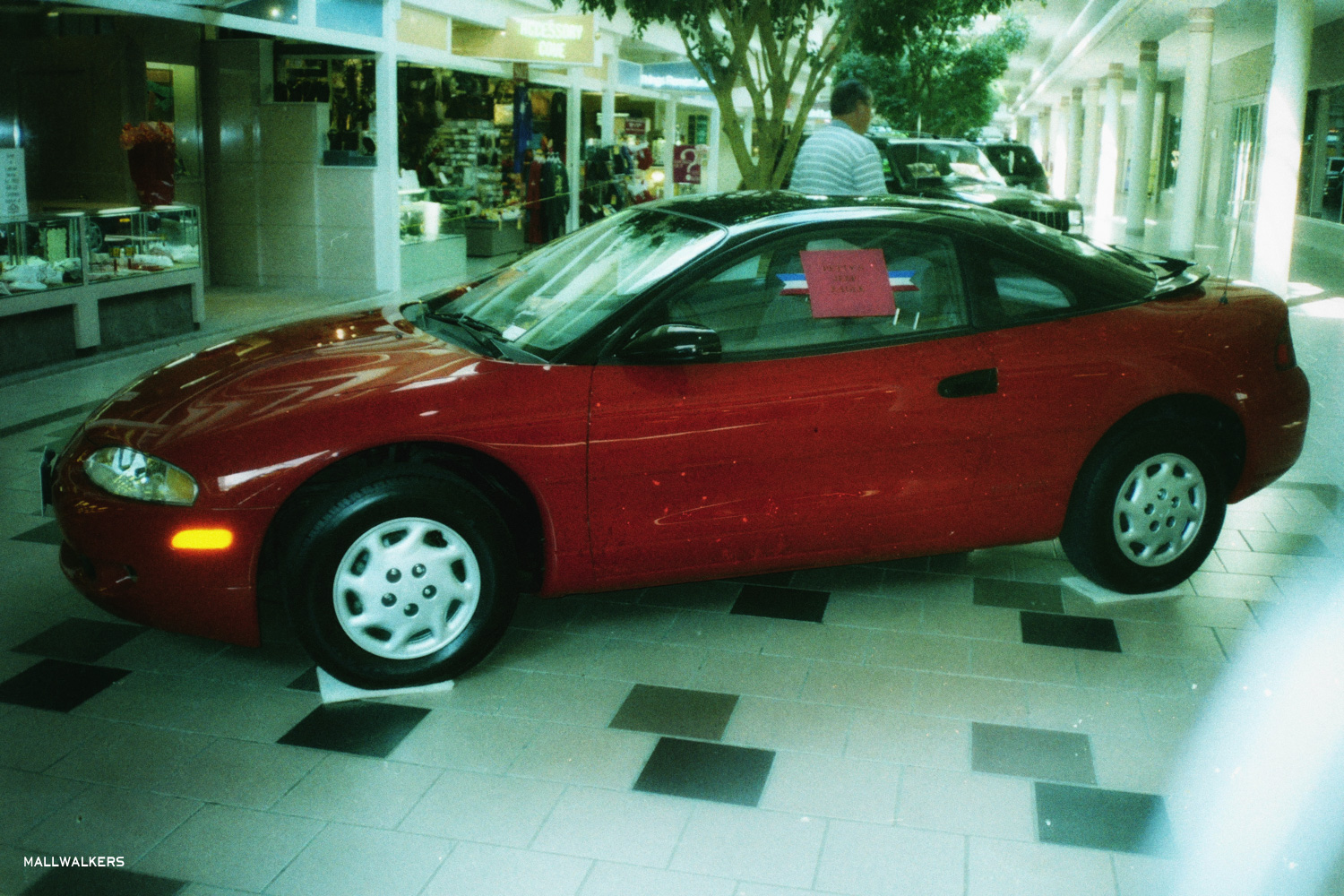 Also parked in front of the old Woolworth’s spot is a 1997 Eagle Talon. This car would go on to receive new exterior badging and new a interior the next year, in a nod to it’s final production year. 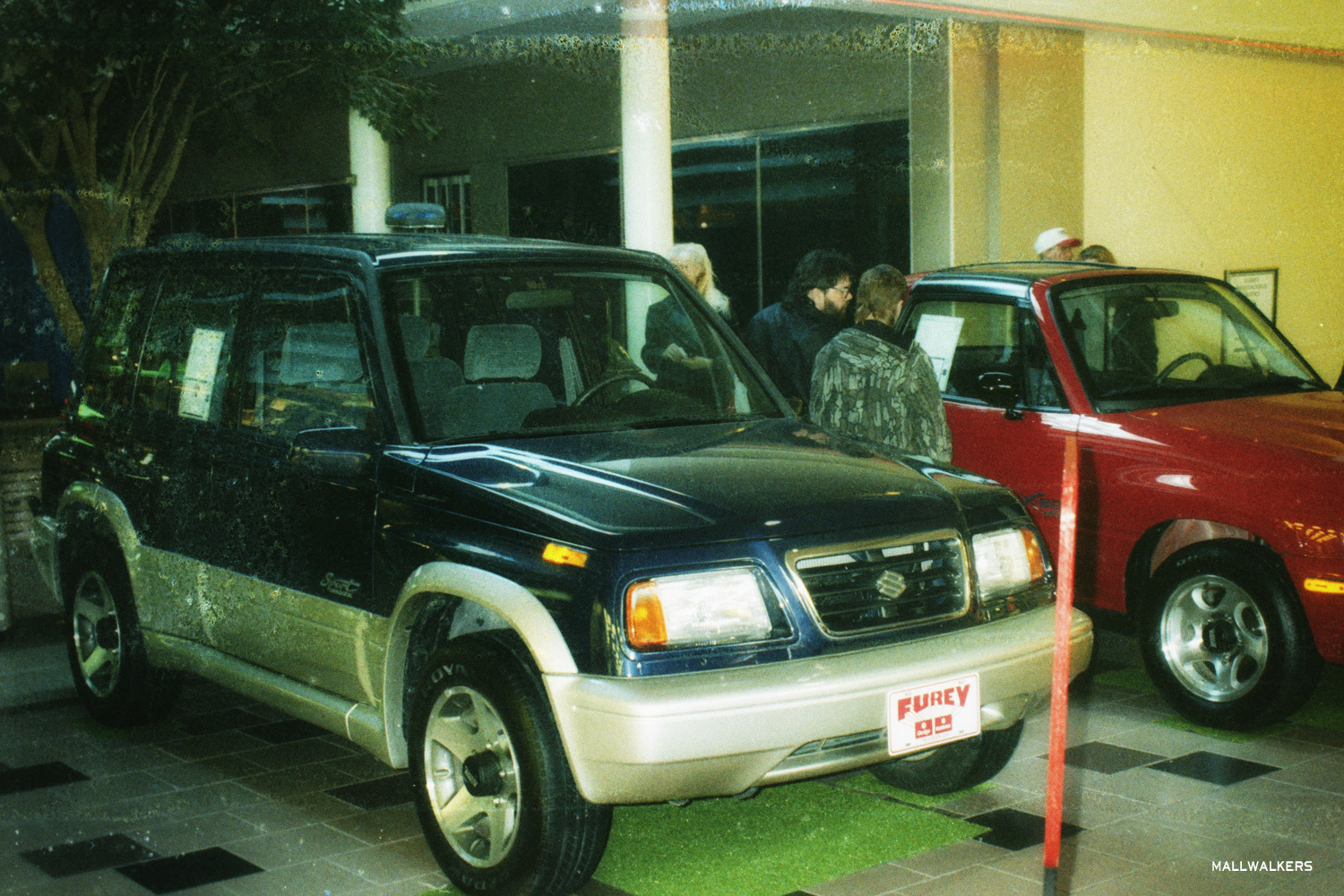 Sitting at the entrance to the Woolworth’s hall, we find a pair of Suzuki’s. A Sidekick on the left and to the right a X-90 featuring a badass T-top. (can I say that here?) 1997 would be the last year for the X-90. 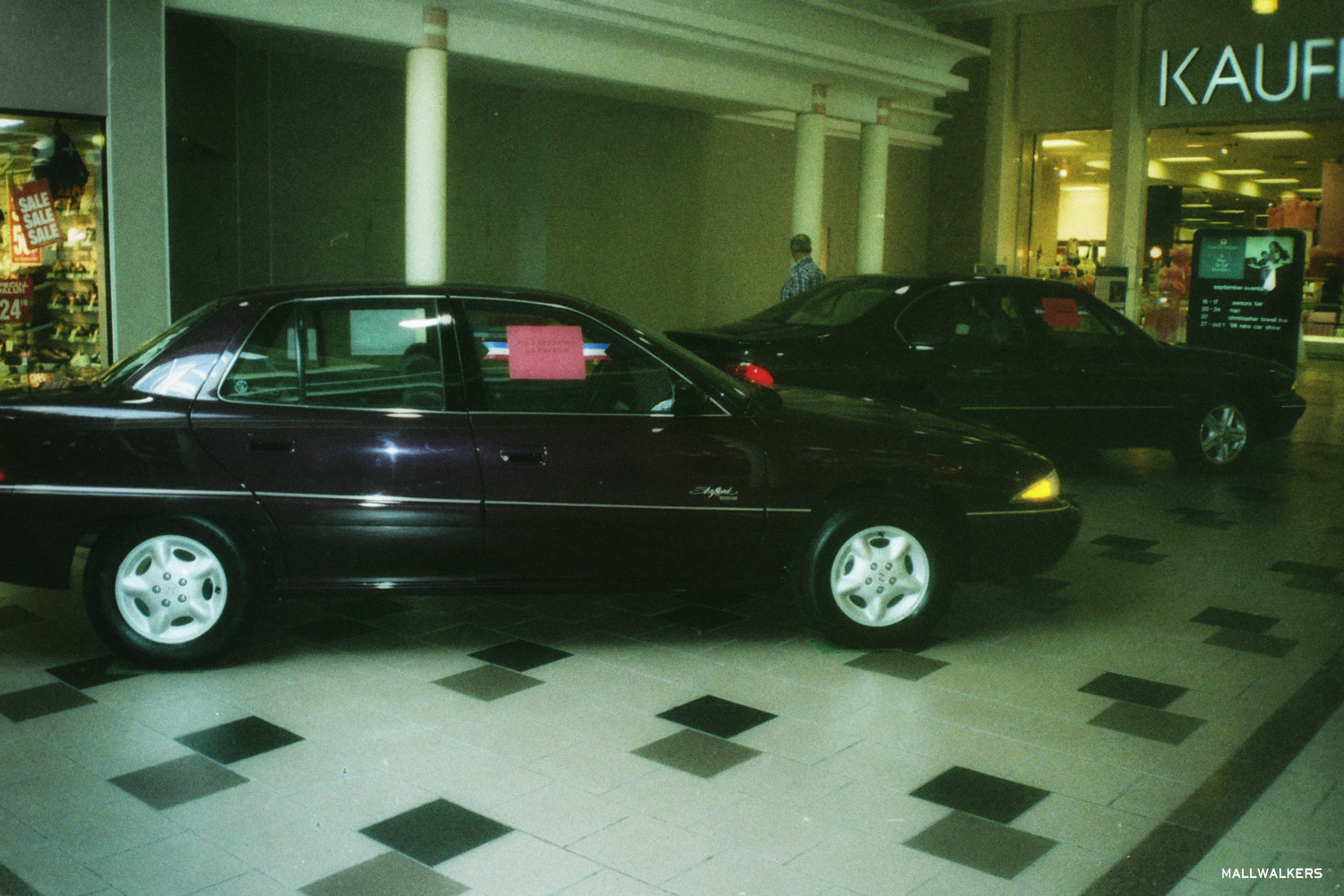 General Motors cooperate cousins, the Buick Skylark, the Oldsmobile Achieva and the Pontiac Grand Am were actually very similar in many ways. However the 1997 Buick Skylark pictured here in purple, in the hall in front of Kaufmann’s, was the only cousin not available in a 5-speed manual. 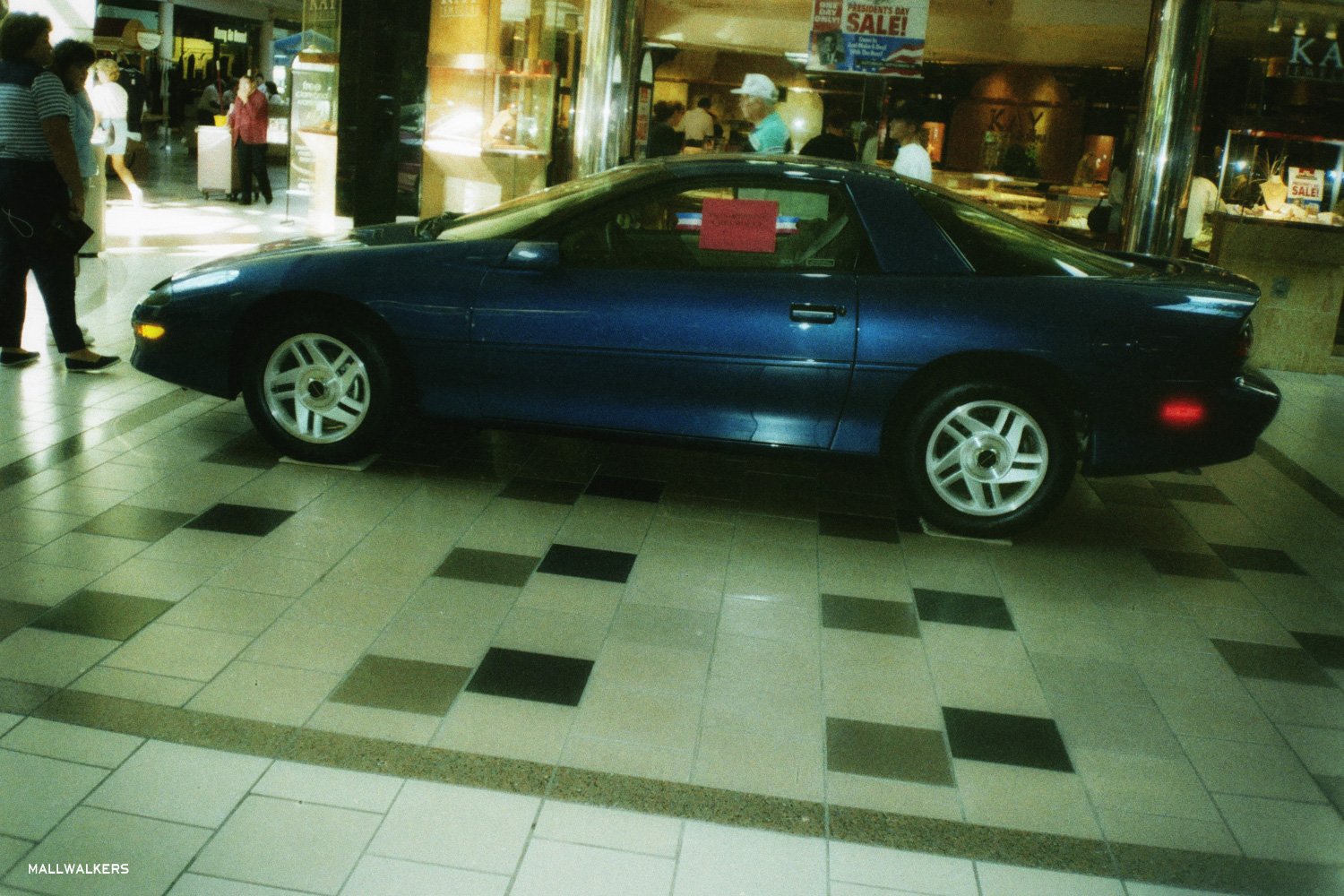 A beautiful brand new 1997, 4th generation Camaro in Medium Quasar Blue must have been an awesome site to behold displayed, in all of it’s glory, in front of Kay Jewelers. 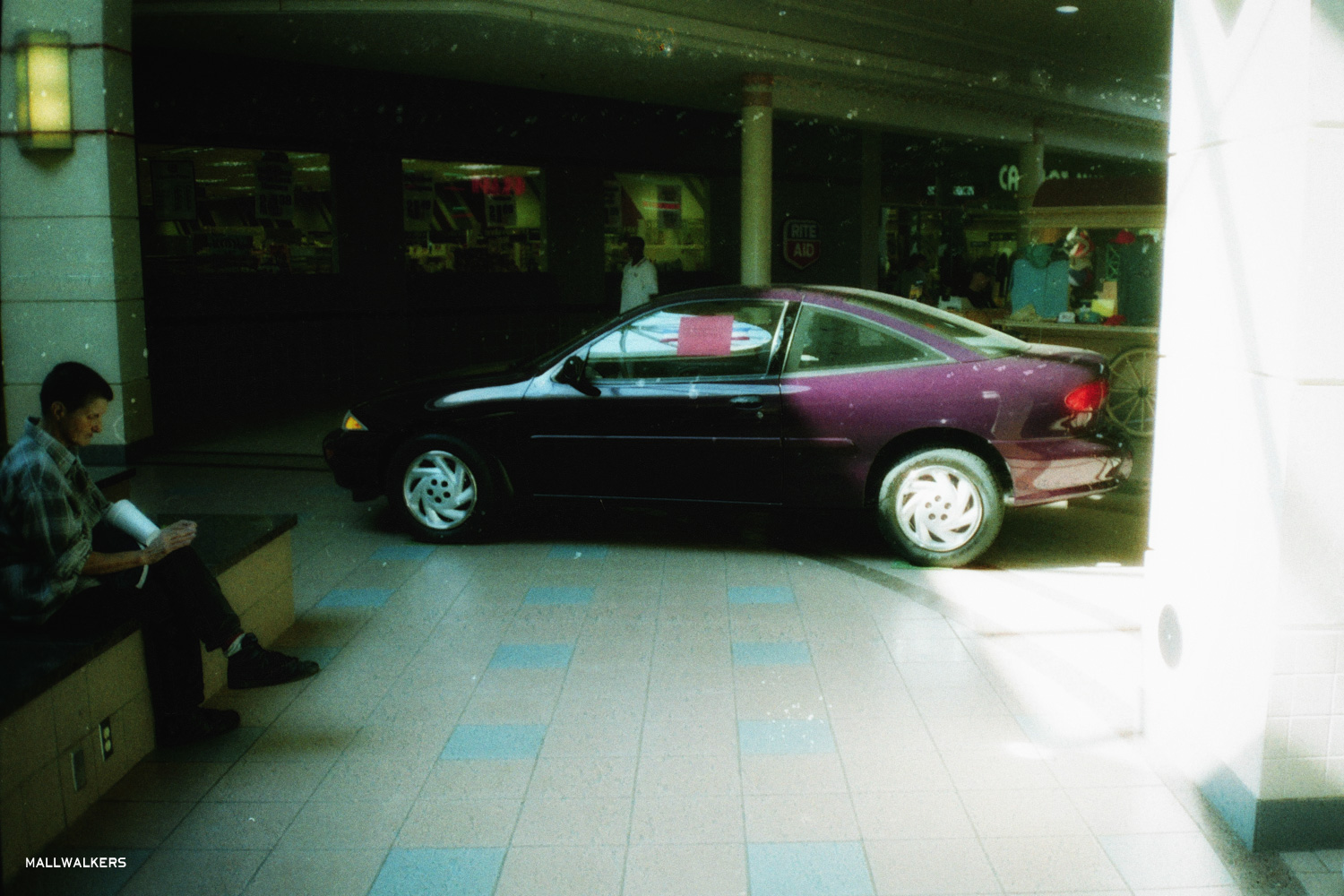 And back to reality as a new Chevrolet Cavalier LS takes company next to the Don Mellett Memorial Fountain. Rite Aid and Camelot Music can be seen in the background. 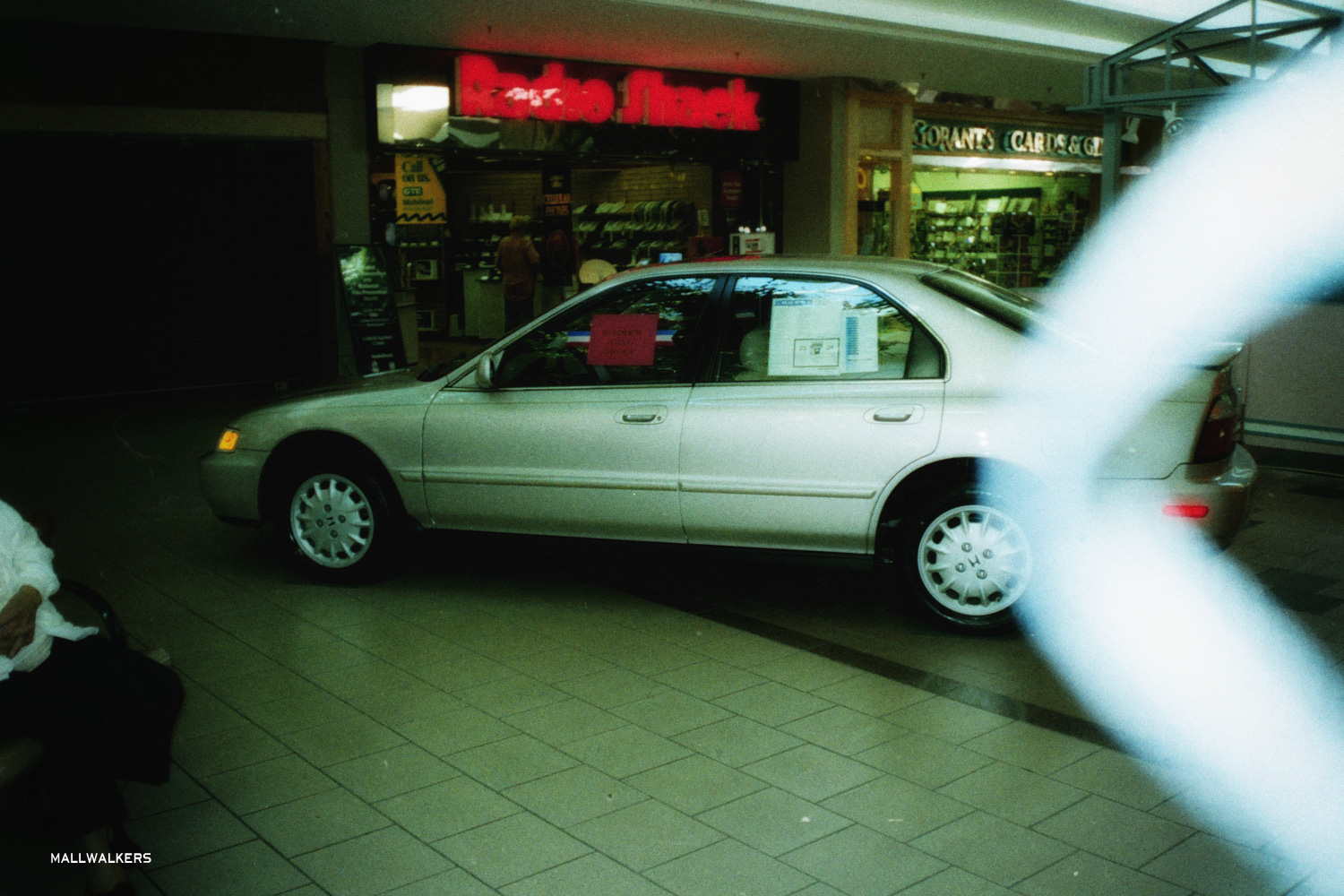 A new 1997 Honda Accord in front of the Radio Shack. Precision or perfection? 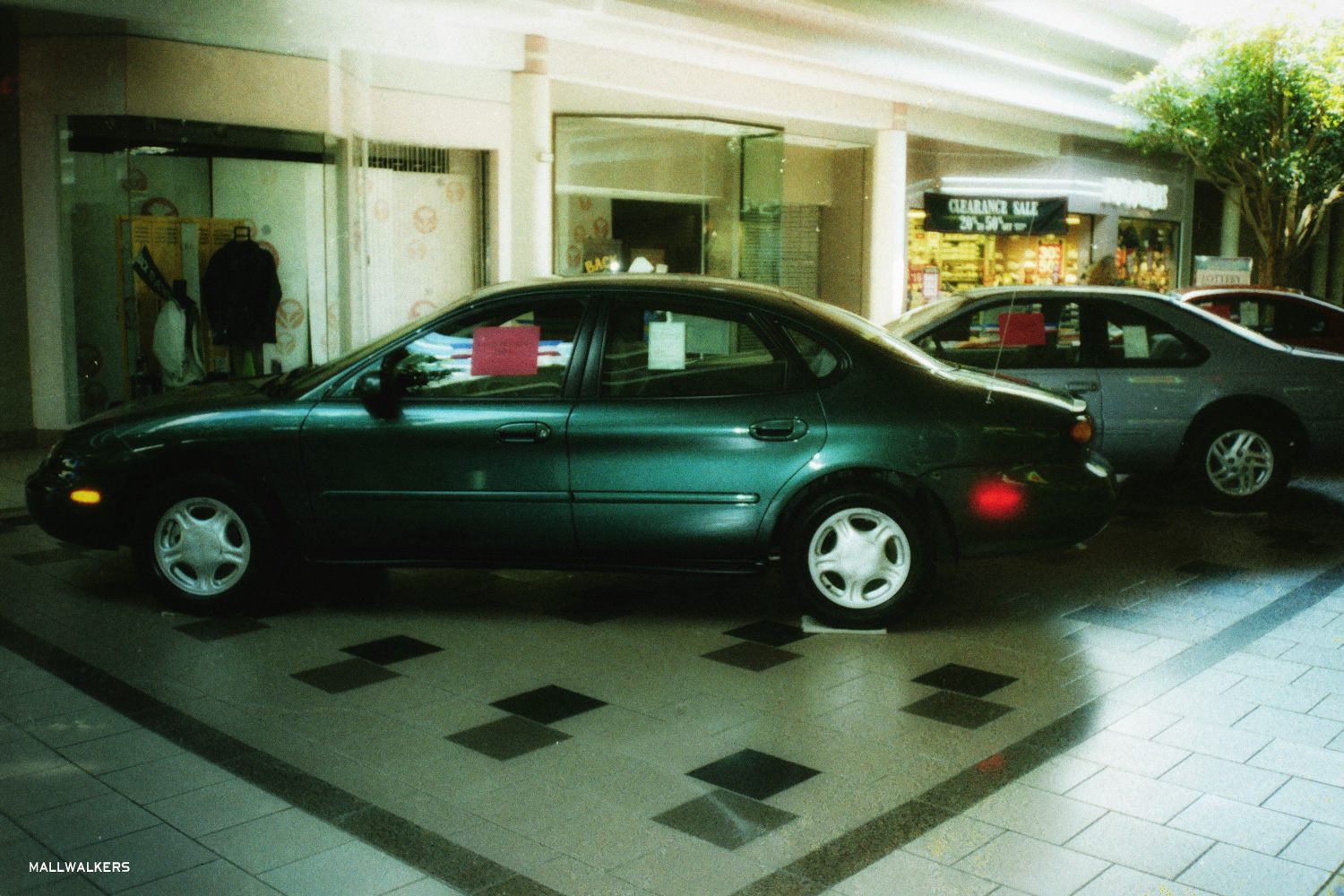 A 1997 green Ford Taurus sits besides a brand new ’97 blue Thunderbird. Sadly, this would be the last year for the Thunderbird until they were briefly brought back to life in the early 2000’s. It looks like the store in the background, having the clearance sale, is the Hallmark store. This means if you turned to your right you would be going in the direction of Kaufmann’s. But, if you went to your left you would find yourself at… 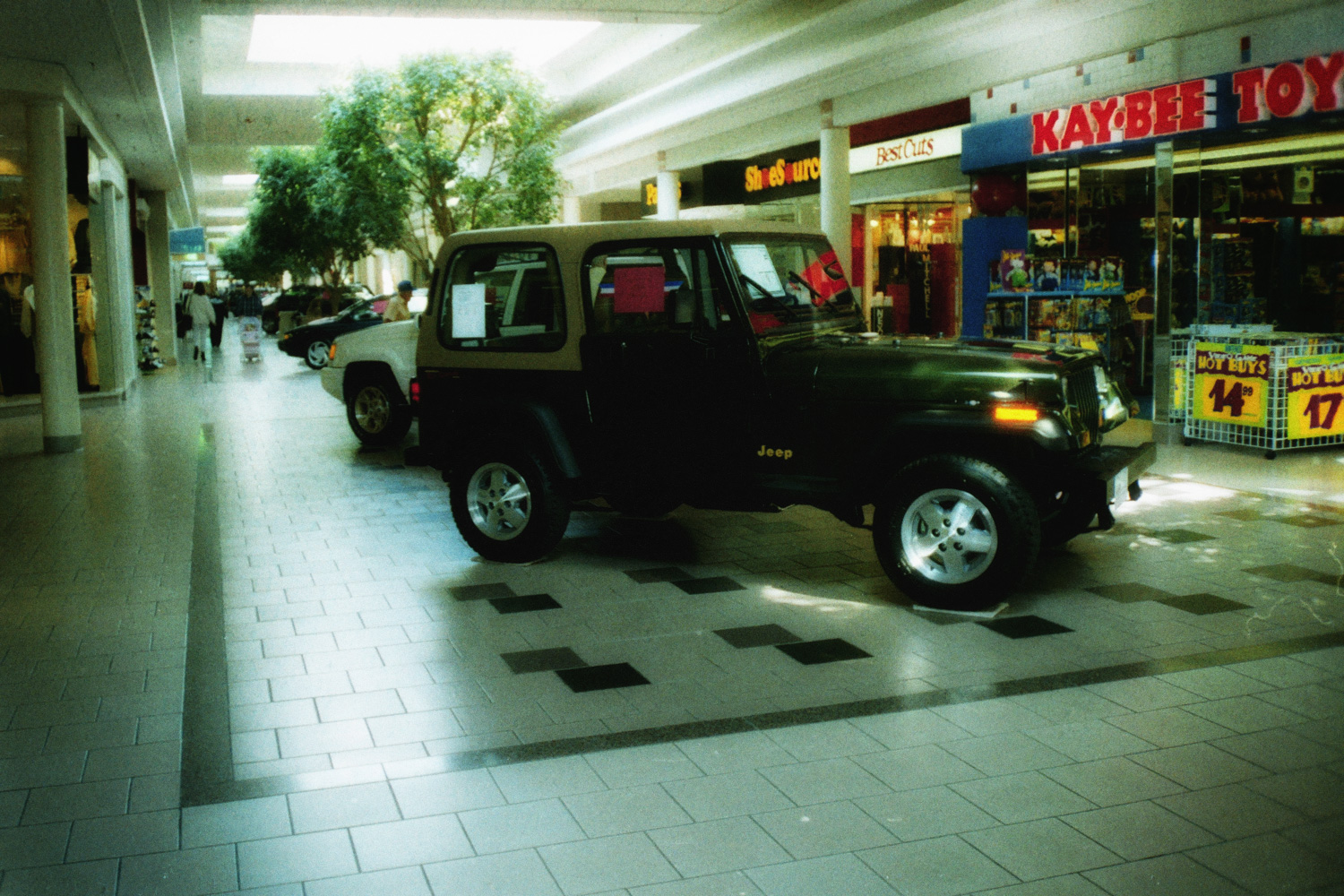 The Kay-Bee toy store. This 1997 Jeep Wrangler is definitely a little nicer that the Fisher-Price Poppity Pop car you could find inside, but maybe not as cool as the Hot Wheels Real Rods 100th Anniversary Limited Edition 3 Car Set. 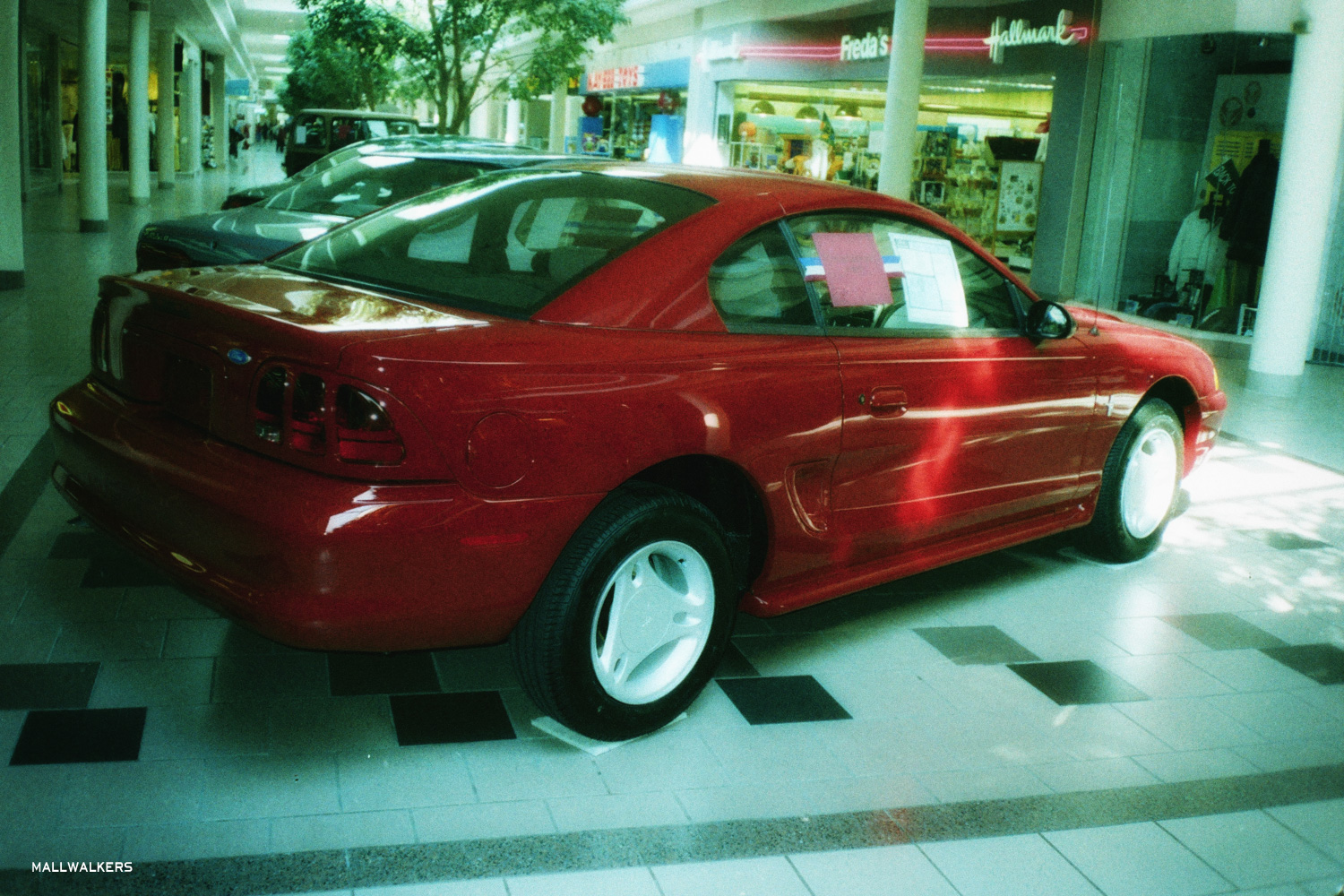 Along with a different view of Hallmark and Kay-Bee we find another fun toy. A brand new Ford Mustang. 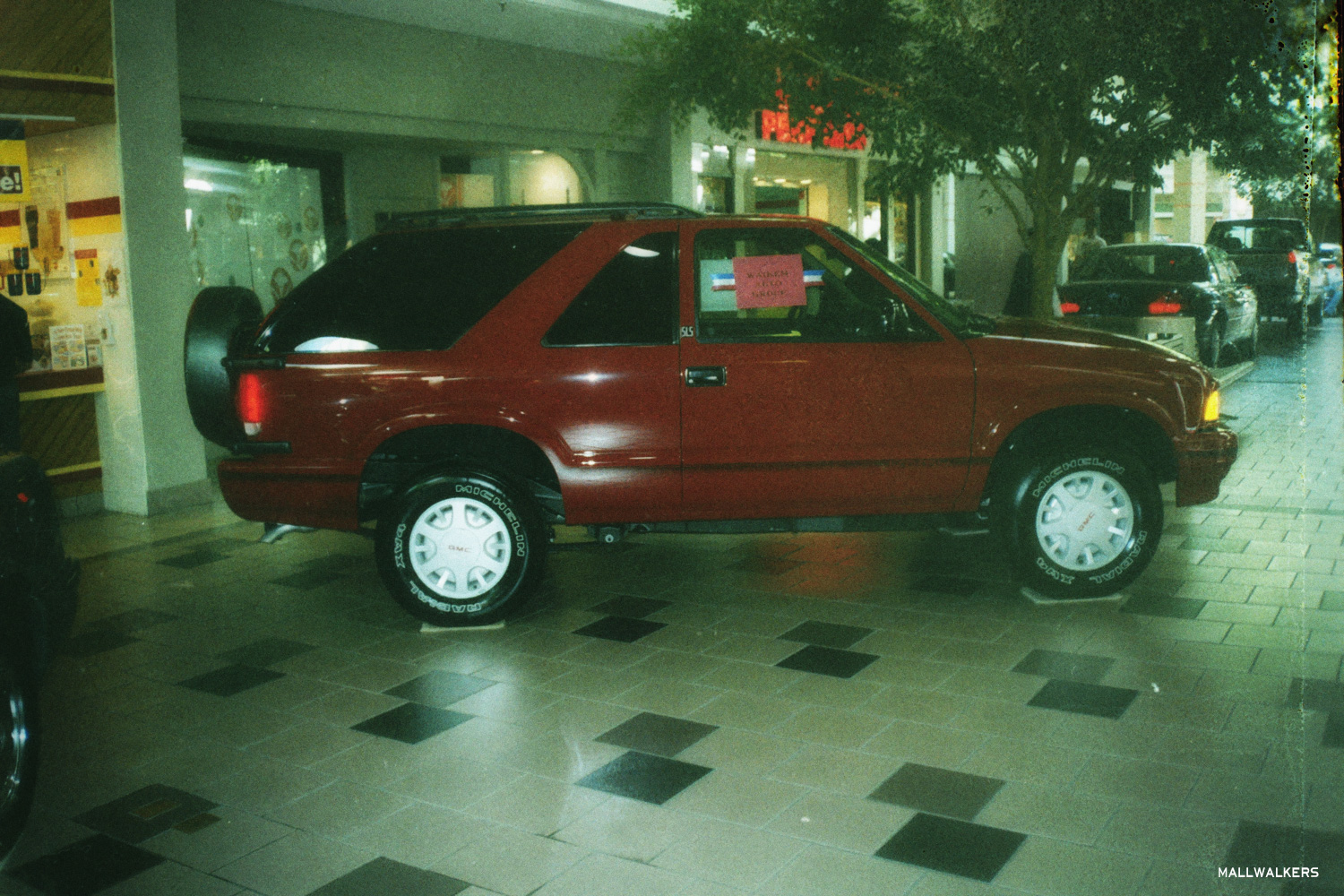 The auto show was put on by the Stark County Automotive Dealers Association in late September, early October. The next year they would move the Auto Show to the much larger Belden Village Mall located only 5 miles down the road.

You too can show your love for all things Canton Centre with one of these sharp t-shirts. 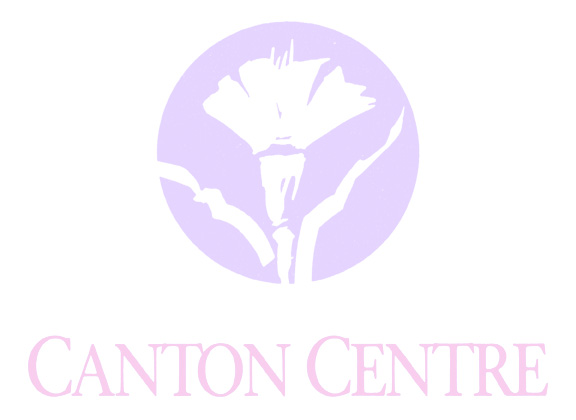 Sometime in the 1980’s a small radio station helped out with an Easter Egg Drop at Mellett Mall in Canton, Ohio. 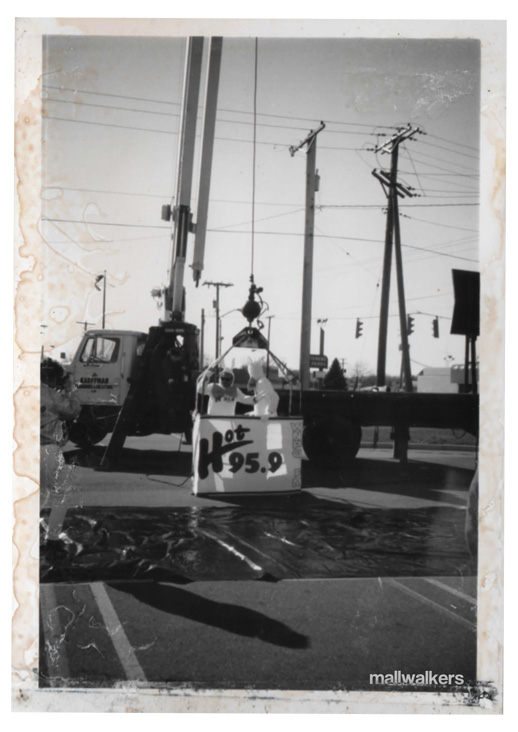 Hot 95.9 was a Top 40’s station based in New Philadelphia, Ohio that served Canton. The station was so small-scale that there was no budget and five air personalities, Scott Shapiro (a.k.a. Scott Davidson), Jeff Turk (a.k.a. JT), Mike Adams, Jeff Shreve and Brian Kelly were left to put all the promotions together. 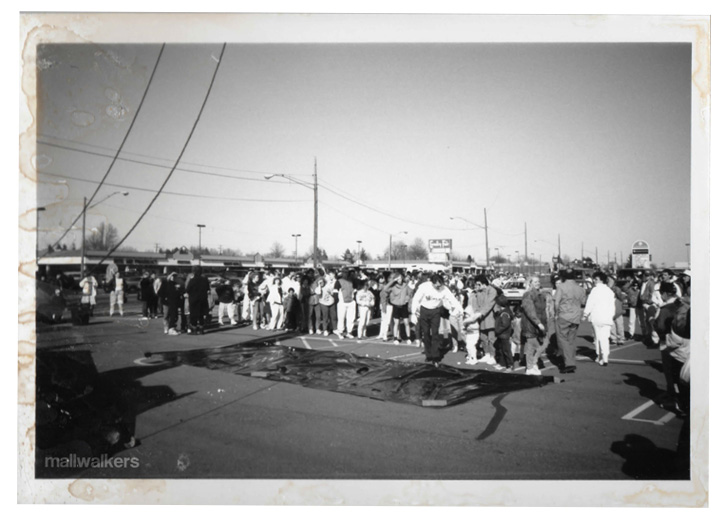 So Mike and Jeff dressed up as bunnies… 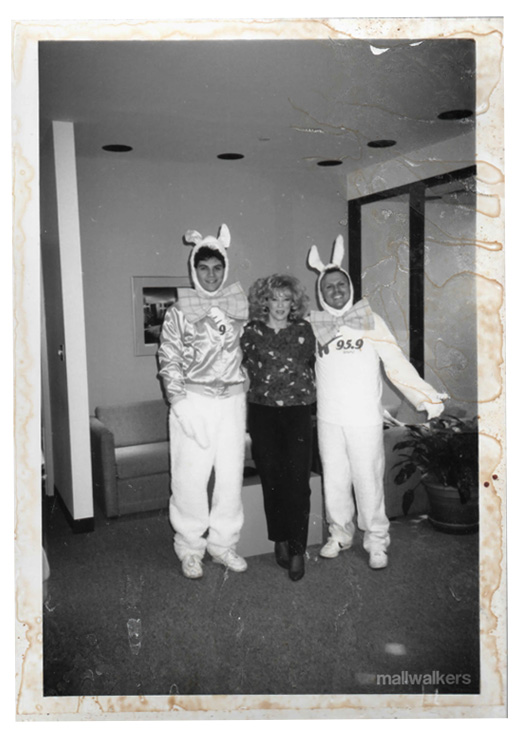 and they got a giant crane… 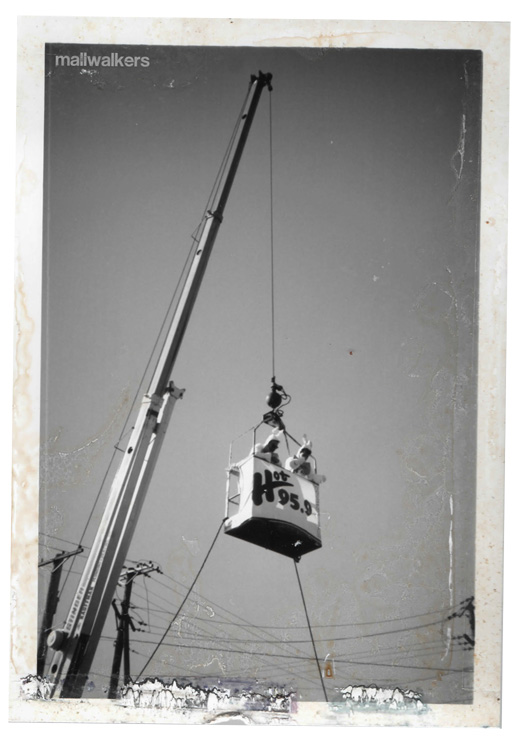 and proceeded to hold an event that was so big there were people wrapped around the mall. 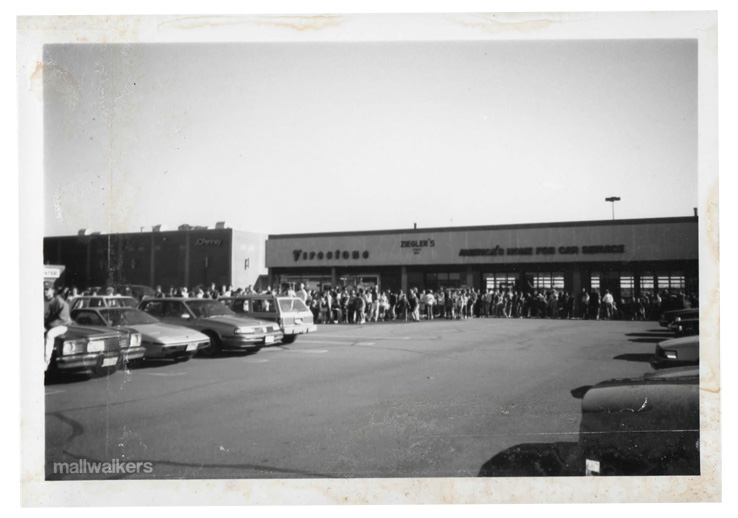