In today’s world it’s hard to imagine life without the convenience of credit cards. But it wasn’t until the early 1900s when stores would begin issuing tokens to only their best and wealthy customers. These customers would be given the convenience of presenting their tokens to sales associates at checkout and then be billed at the end of the month, much the same as modern credit accounts.

By 1929 charge accounts would account for nearly half of all retail sales for stores who offered them. It wasn’t long after in 1935 that a standardized card based bookkeeping system known as Charga-Plate would gain popularity. Similar in look to a soldiers ‘dog tag’ these new plates would be notched with the customers name and address. The plate would simply be placed in a machine with a charge slip placed on top and then a ink ribbon would imprint the customers information onto the charge slip. 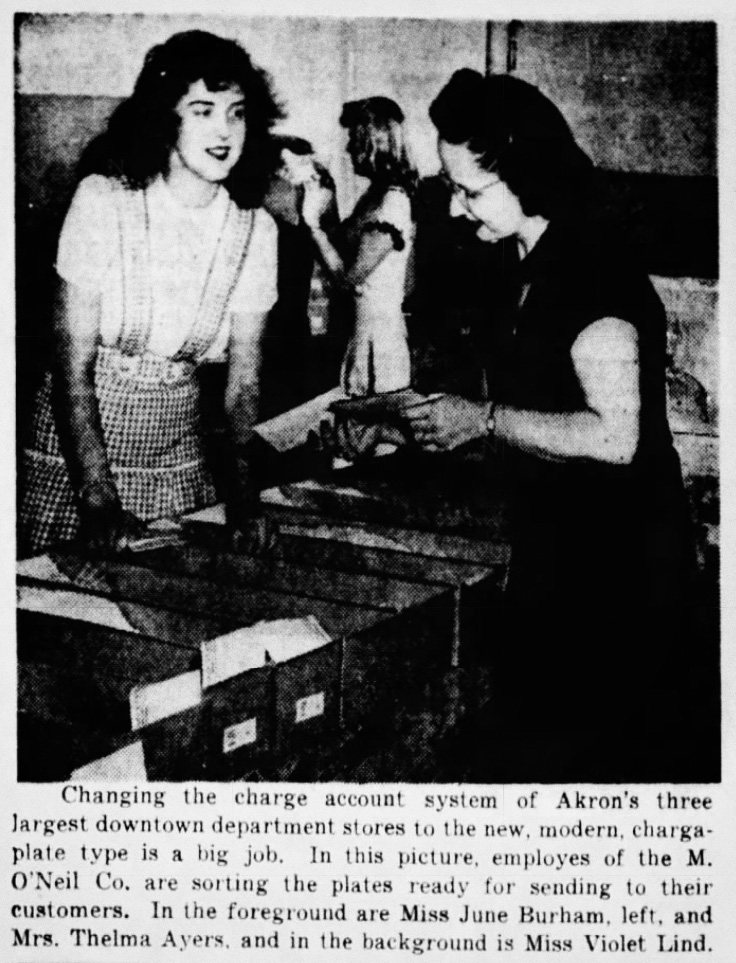 In 1946, The Charga-Plate system would come to Akron, Ohio. The M. O’Neil Company, Polsky’s, and Yeager’s would all adopt the system and issue an Akron Charga-Plate which customers could use at any of the three stores.

O’Neil’s would continue to use the system up to the late 50s when they would establish their own line of store credit cards. These new cards would closely resemble the credit cards we are familiar with today though they would function similarly to the Charga-Plate with rollers imprinting the face of the card onto a sales receipt via carbon copy paper. This is the reason that some credit cards still have raised numbers to this day.

In 1969 the magnetic strip on the back of credit cards would be developed by IBM who still consider the invention one of their 100 greatest contributions to society. Initially this new technology was much to expensive and it wasn’t until the 1980s that many company’s went away from the imprint style machines to the new magnetic strips.

Now with just a swipe of a card an electronic machine would send the customers information to the card issuers computer and within seconds the computer could verify if the customer had sufficient credit to complete the sale.

Customer’s at O’Neil’s would continue to swipe their cards until 1988 when owner The May Company would merge their O’Neils division into May Co. Cleveland and over time rebrand the stores as May Company.