In 1966 Davy Jones, Mickey Dolenz, Michael Nesmith, and Peter Tork (better known as The Monkees) had became pop music idols, television superstars, and international sensations. The boys were also becoming fashion icons with their English-Cowboy-Mod styles. Kids wanted to look their idols on TV and needed an outlet find these new fashions.

Also in 1966, producers were putting the finishing touches on the new Monkees album “More of The Monkees”. Penney’s thought that the release of the new album would be the perfect time to release their new clothing line. Hoping to cross-promote, Penney’s hired photographer Bernard Yeszin to do a photoshoot of the boys wearing clothes from the Monkees Collection.

The photos were supposed to be used exclusively for promotion of JCPenney however one of the pictures ended up being used for the cover of the new album. This was great for Penney’s, as kids could go to the store and get the exact clothes that their idols were wearing on the new album. The Monkees however weren’t very especially keen to the new album cover. They had hoped to use the album to help project their cool and eccentric look. Instead there they were, dressed in somewhat ordinary clothes from JCPenney.

Mickey and Davy were especially upset with the album cover. Davy later said in an interview that he had never seen the album until a young fan presented it to him asking him to autograph it. A confused Davy asked her what it was and she replied that it was his new album. 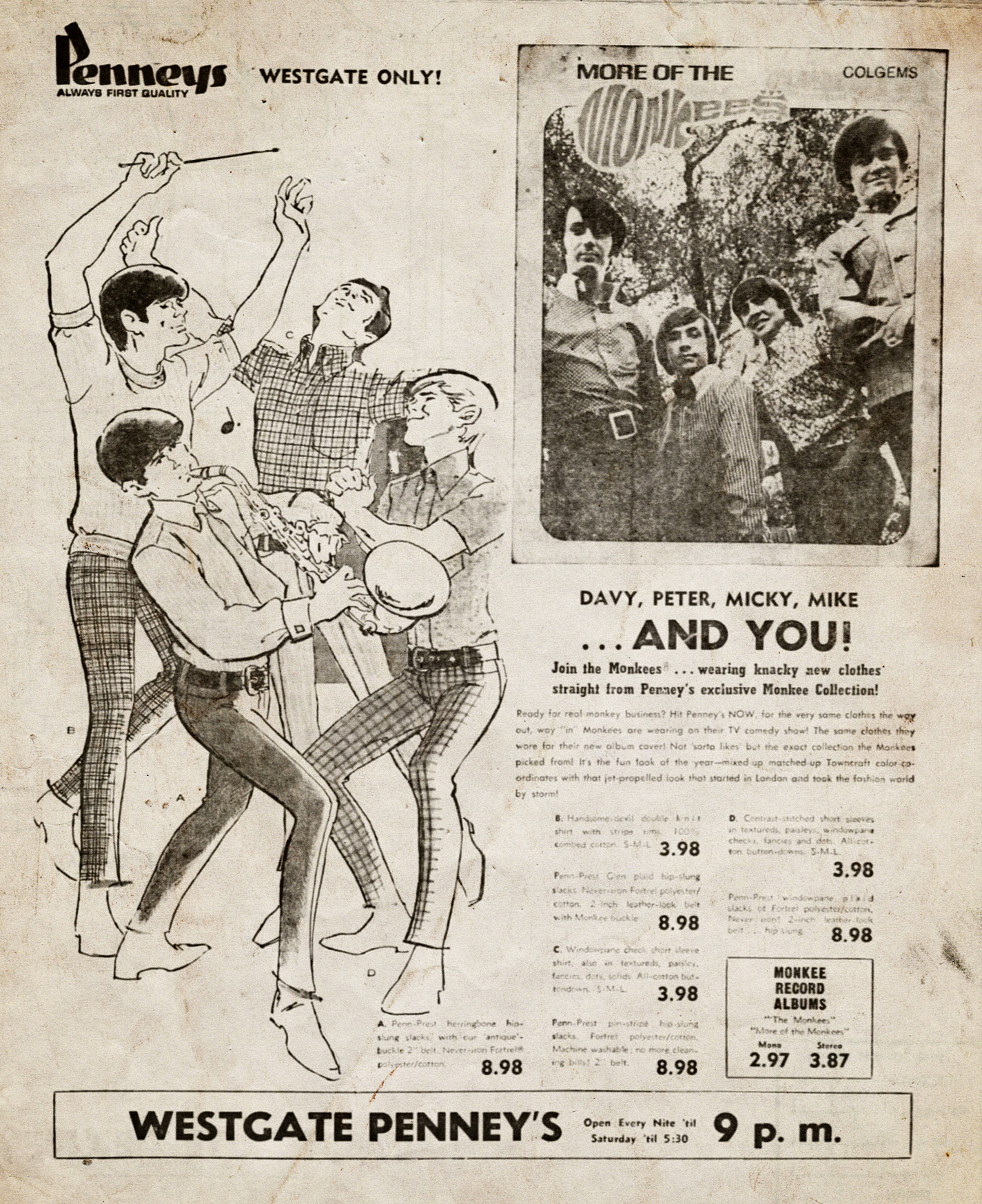 Either way it worked out for The Monkees and Penney’s. The album would spend 18 weeks at number one which would be the longest of any Monkees album. The clothing line enjoyed initial success and plans were made to develop a new section of the store known as Monkee Corner. This new section would see the addition of more Monkees styled clothing such as shoes and wallets. There was even plans for a girls line of Monkees clothing by legendary London designer Mary Quant.

But alas it wasn’t meant to be. By fall 1967 Monkees merchandise sales were plummeting and the plug was pulled on Monkee-Mania. There’s not even a mention of Monkee anything in Penney’s 1967 Christmas Catalog.

Though the Monkees could be considered sellouts from the beginning, I still love them none the less. The music is great and just hearing the theme from the show instantly puts me in a good mood.

Monkees on YouTube – A playlist of all the classic episodes. 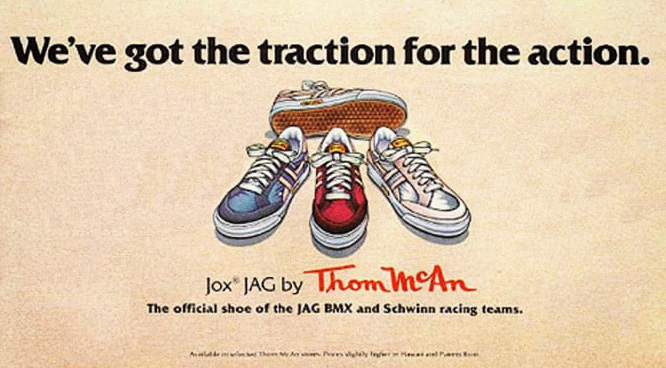 Surely anyone who has seen the 1985 movie Desperately Seeking Susan remembers the jacket. After all it did pretty much hold the “key” to the entire movie. But don’t forget it was Susan herself that decided the boots were indeed worth trading the jacket for.

By the time the movie was released the Madonna craze had already begun and thankfully for us pieces could be found in the local shopping malls. Frederick’s of Hollywood was seeing an increase in the sales of the Merry Widow, the longline bra that Madonna frequently wore. Baker/Leeds, a leading shoe store popular with high school and college aged shoppers, was also able to jump in on the trend by introducing “The Boot”. Cause what else would you call it? Each store was given a limited stock of boots, and when those were gone stores were able to take individual orders. The boots were produced in Missouri so it really wouldn’t take too long before your order was ready. But for some teens that was not satisfactory. Just like Susan they wanted their boots now.

Surprisingly to this day it seems the poor boot is the least sought after. It might cost you several hundreds of dollars to get your hands on The Boot originally sold at Bakers/Leeds, but it will cost you thousands to get one of the promo jackets briefly sold through MTV. Julien’s Auctions has auctioned off a movie worn jacket for over $250,000, and even one of the earrings was able to fetch $12,500. Yet when one half of the original movie worn boots went under the hammer, the right one, the left was donated to Hard Rock Cafe, it sold for just over $5,000. The (original) Boot deserves a little more than that if you ask me.

In the late 70s and early 80s the “preppy” look started to become all the rage and if you wanted to fit in with the in crowd then you better have yourself a nice polo style shirt. Preferably one with an alligator on it. But, if you were either cheap or just couldn’t afford it you would have to settle for one of the many knock-offs available.

Enter JCPenney. Who needs an alligator when you can have a fox anyways? At a full five dollars less than a genuine Lacoste one could get the same look, feel, comfort, and quality with The FOX! Offered in both his and hers models, The Fox shirt was available in a variety of bright colors. Paired and tucked into a pair of pleated pants with a nice thin belt and one might look as if they were headed to the yacht club.

Truth be told, I really want one of these. A quick check of eBay shows several really nice ones that can be had for less than twenty bucks, which is right around the same price they sold for in the 80s, and that seems like a steal in todays nostalgia crazed fashion market. 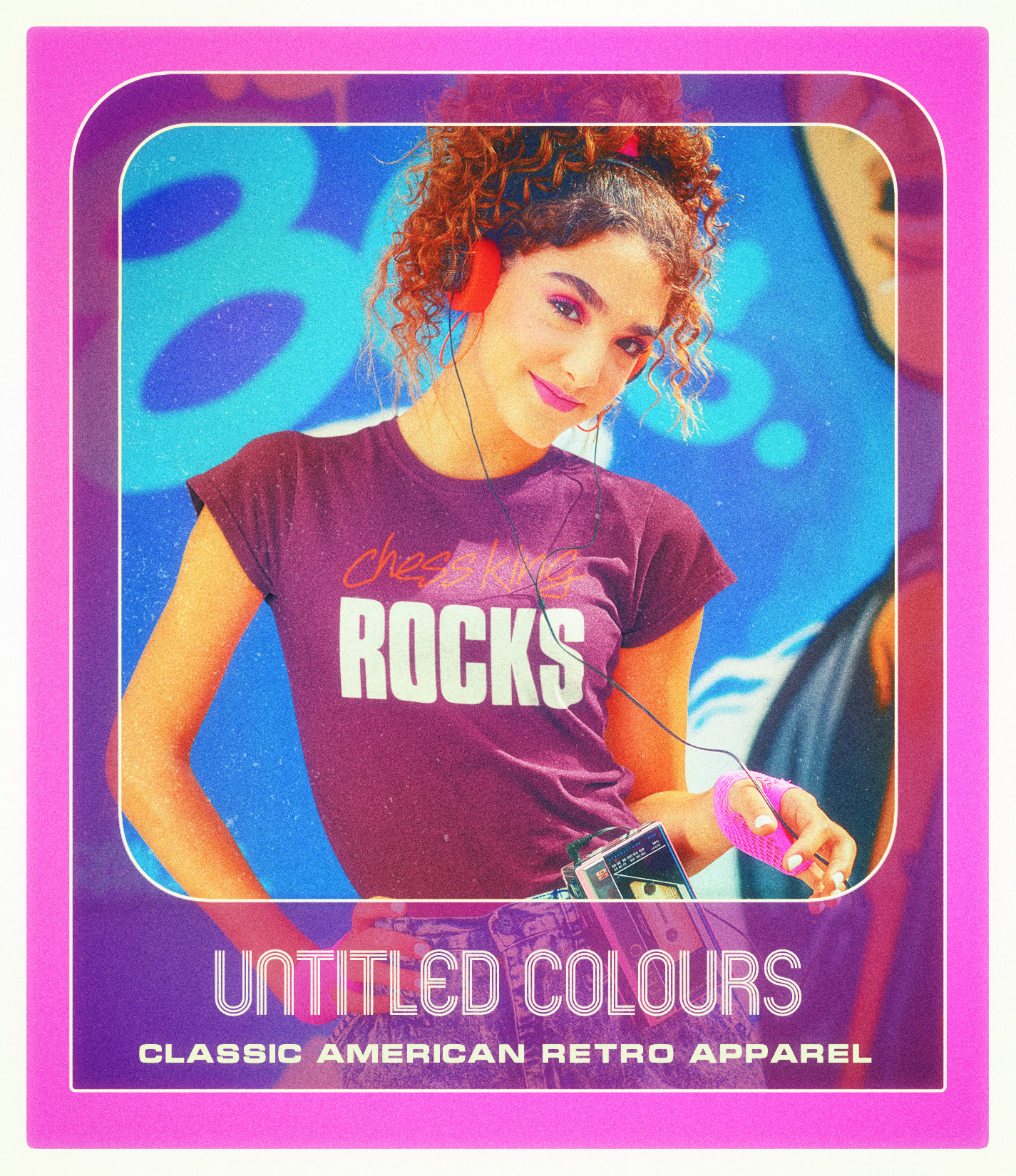 It was a pleasant surprise to come across this old Dover Elevator ad while recently thumbing through an old Architectural Record from 1979. I always thought the elevator at Rolling Acres Mall was special, but I’m glad to see that I wasn’t the only one who thought so. Dover Elevators apparently thought so highly of the elevator that they featured it in this ad which ran for several months in multiple trade publications.

With a design similar to what one might expect to find in a big city hotel, The elevator at Rolling Acres Mall was touted as “Akron’s First Bubble Elevator” and would serve customers as they traveled from the main level down to the Promenade Level.

Though the ride on the elevator itself only lasted 15 seconds, it was definitely worth waiting for to take in the the beautiful fountains and and the French-styled greenscaped Parc from above before gliding to a smooth landing at the Promenade level.

The elevator was a hit with shoppers, especially children. It was claimed that the because of its novelty the elevator had probably carried nearly as many shoppers up and down as the double escalators that it compliments in the Court of Lights.

Head over to The Court of the Twelve Trees or take a video tour of Rolling Acres Mall from 2003 where you can see the bubble elevator and the escalators running.

What could possibly be better than denim on denim? When it’s IOU denim from Merry Go Round of Course! The pastel accent down the leg, the soft blue denim, stone-washed to perfection with pegged pantlegs, and a matching denim jacket to boot. I’m not sure if a more timeless look has ever been created. 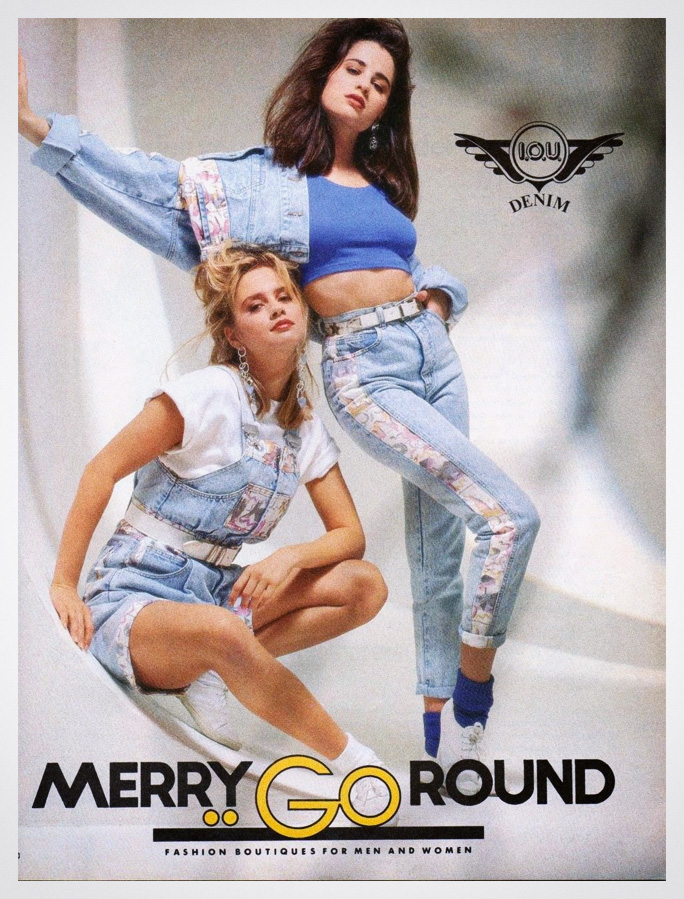 As amazing as their women’s fashions were, Merry Go Round also found success in selling trendy high-fashion clothes to young men with brands such Skidz, Z. Cavaricci, Major Damage, Get Used, Cross Colours, as well as in house brand IOU.