In 1964, on Akron’s west side, The DeBartolo Corporation was building the city’s first enclosed shopping center, Summit Mall. On the northeast side, Akronite Richard B. Buchholzer had partnered with Cleveland developers Forest City Enterprises and was in the beginning stages of building Chapel Hill Mall. Malls were going up everywhere across the country and it only seemed logical that Akron’s south side would be next. When studies showed the demand existed and with major department stores showing interest in the area, Buchholzer and Forest City concluded that the time to start planning Akron’s third major mall was now.

Two years later the group would settle on a 260 acre site on Romig Road located in the city’s southwest corner. The initial plan was to build a near twin to Chapel Hill. A single layer shopping mall flanked by two anchor department stores. In the acreage surrounding the center the group panned to build a 200 suite motel, medical and office buildings, and some 900 apartment units.

But Rolling Acres wasn’t the only shopping center being planned for the area. In the nearby city of Barberton a group was planning the Austin Mall Development, a smaller enclosed mall that would be surrounded by a new housing development.

Both projects faced major setbacks from area residents with many believing that the shopping centers would reek havoc on downtown retail in both Akron and Barberton. It was also thought that a shopping center would stunt downtown urban renewal projects.

Though Rolling Acres and Austin Mall were both eventually given the green light for rezoning, the Austin Mall never materialized.

After years of delays, construction at Rolling Acres would finally get underway in 1973. The shopping center was built in two phases. The first phase being the malls main level and the initial two department stores. The second phase would be the addition of a promenade level and three more department stores.

The full first year of construction was spent grading the rugged landscape and transforming it into a workable site so the foundation of the mall could be laid. Once the initial foundation was in the rest of the project took only eleven months to complete. 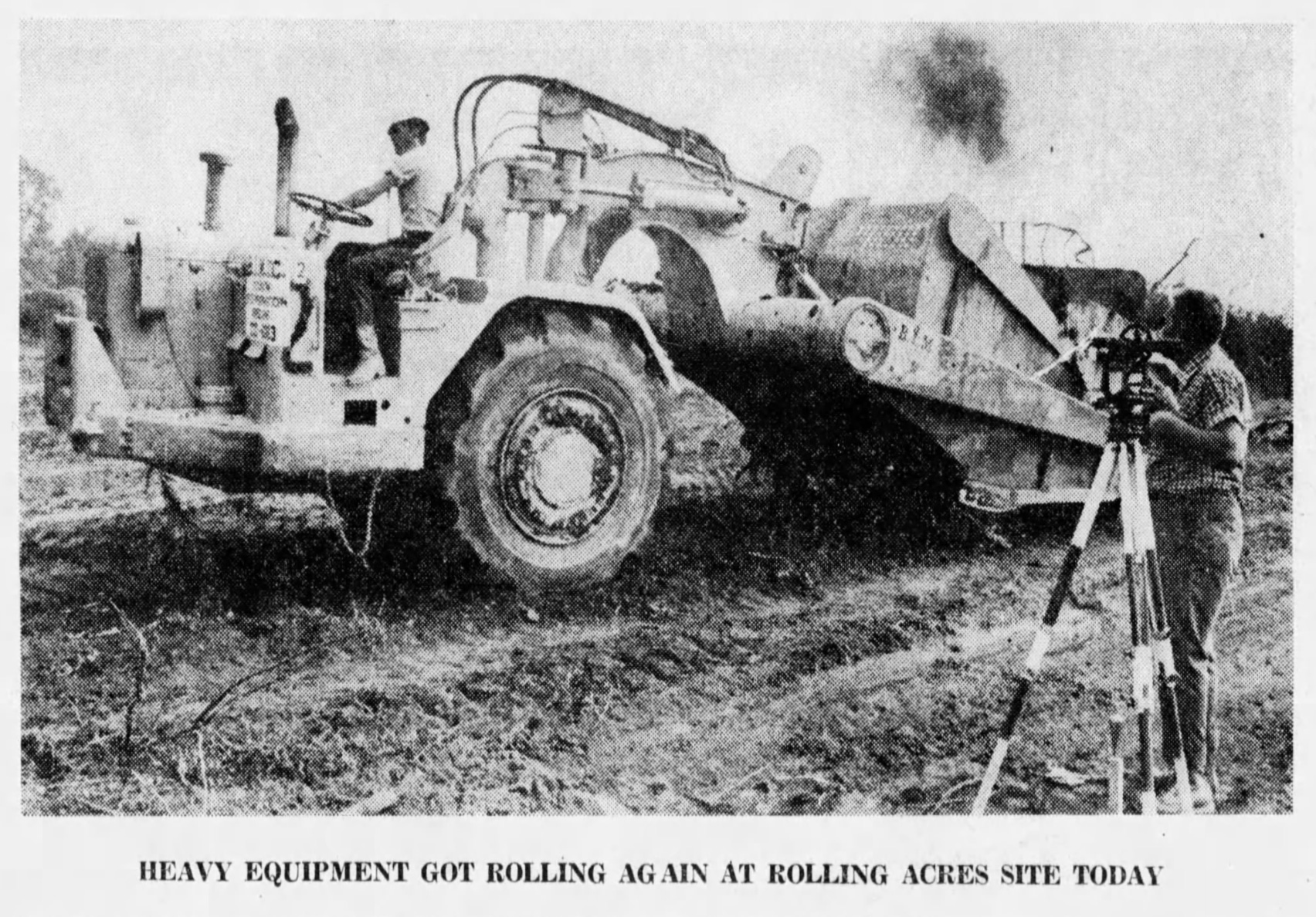 Rolling Acres was nearing its opening. All of the years of planning and manpower put into the construction were finally becoming clear and the end result was truly beautiful. A modern wonder of retail was finally coming to life.

Prior to the malls opening there was a special preview ceremony and private reception held at the mall where Rev. V. Stan Hampson pronounced the blessing of the mall and consecration of The Court of the Twelve Trees using a thousand year old Hawaiian chant.

After the mall was given it’s blessing, Ruth Ballard, wife of former Akron mayor John Ballard gave a champagne christening for the spectacular fountain that sat at the center of The Court of the Twelve Trees underneath a massive spaceframe skylight.

At long last, the big day had finally arrived. The grand opening. The original twenty stores would be a perfect representation to the company’s philosophy of meeting the needs and demands of shoppers of all ages and incomes. A family could spend the whole day at the mall, take in a movie at the cinema, let the kids play video games at Play Palace, and then cap the day with dinner at Der Dog Haus.

The opening was a success. New stores would open on a near weekly basis. In addition to this success, Rolling Acres was also becoming more than just a retail outlet, the mall was becoming a center of community activity with special activities and events ranging from meeting Santa or the Easter Bunny, to meeting celebrities such as the Budweiser Clydesdales or getting to ring a life-size replica of the Liberty Bell. There was always fun to be had at Rolling Acres and the community loved it.

Riding high off their achievement of a successful phase I it was now time for the company to turn its attention to phase II. But that’s a story for another time. Stay tuned!

Need to feed your nostalgic Rolling Acres craze? Be sure and check out this video walkthrough of the mall.