Cheese wheels.
That was the plan. Cousins Richard and Earl Ransom thought there was a gap in the market needing filled for a shop offering old-time wheels of swiss and cheddar cheeses, just like they did in the days of their youth. Customers would be able to get their orders cut fresh, straight from the wheel. In 1950 they would take their vision to market, setting up shop at a home show in Toledo, Ohio. Their shop would be so successful at the home show that the cousins would soon be setting up kiosks at shows and fairs across the country.

Building off their success of cheese sales, the Ransoms would introduce a new product in 1956, “The Beef Stick”, a four pound, two foot long smoked summer sausage. They would also rename their business to Hickory Farms after their new product’s hickory style smoky flavor. The new beef stick would be the perfect compliment to their cheeses and with customers loving its flavor it would soon become the company’s cornerstone product. Business was booming for Hickory Farms and in just three short years the cousins would be selling 1.5 million pounds of summer sausage at their many kiosks and by mail order.

It was time to expand, and in 1959 the Ransom’s opened the first Hickory Farms retail outlet in Toledo, Ohio. The new store would adopt what would go on to be the company’s signature look, a country motif, complete with wagon wheels pressed into service as lights. beams criss-crossing the ceiling, and red barn style storefronts. Staff would be dressed in red and white checkered shirts with denim skirts.

Believing so strongly in their products, the Ransom’s thought they had the finest quality products on the market and their way of convincing their customers of this was to offer plenty of free samples. And it worked. After just small a taste of beef stick, the customers were hooked.

In the early 60s the Ransom’s began offering franchises of the stores and soon after  Hickory Farms were popping up everywhere and by 1968 they would be celebrating their 100th store opening.

Also in 1968 the already world famous beef stick would achieve new heights so to speak being selected as one of the menu items for the Traleika Traverse Expidition, a trek to the top of Mt. McKinley in Alaska. The beef stick was selected for its keeping qualities and its high calorie per weight value.

Over the years the Hickory Farms beef stick has won numerous awards and medals and has yet somehow been delegated to become the gift you get people when you cant think of anything else to get them. Though I must say I’ve yet to ever hear of anyone ever complaining of getting it as a gift.

As for the Ransom’s? They sold their stakes of the company to General Host in 1980 for 40 million dollars ending their two decade plus reign as the summer sausage kings. 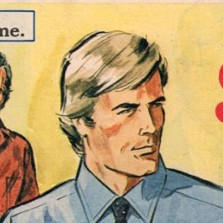